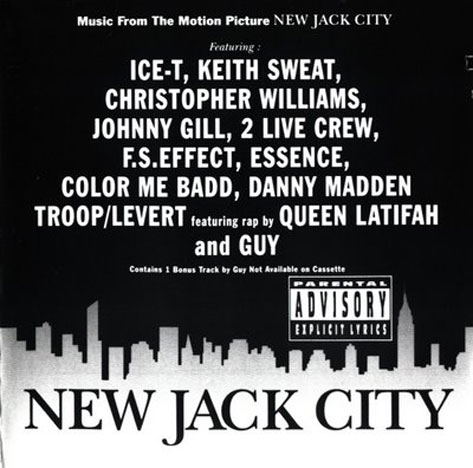 1991 was a landmark year for black film. That year saw the release of several films that have gone on to classic status, including The Five Heartbeats, Boyz n the Hood, Hangin' with the Homeboyz, and Straight Out of Brooklyn. One of the biggest breakouts of the year was Mario Van Peebles' New Jack City. The film, a harsh look at the crack epidemic of the late '80s and early '90s, helped to cement the careers of quite a few actors (especially Wesley Snipes, whose turn as villain Nino Brown was one for the history books). It also ushered in the '90's era of movie soundtracks. While movie soundtracks were intertwined with films during the blaxploitation era of the '70s, in the '90s the synergy reached a new high, with the soundtracks sometimes eclipsing the movies they were meant to help promote. (Does anyone actually remember High School High the film, for example? Didn't think so.)
Center

And that synergy was further realized in the performance pieces of the film. You see, not only did the artists appear on the soundtrack, but they were weaved throughout the film as well. Troop and Levert's mash-up of "For the Love of Money/Living for the City" was performed on a street corner, while Guy's title track was performed in the club that Nino and his CMB cohorts frequented. Elsewhere, Keith Sweat showed up tux and all at the film's bloody wedding. It was obvious the music for New Jack City was just as integral as the performances, almost taking on the role of an additional character.

Like the formula for many soundtracks, New Jack City paired a who's who roster of New Jack Swing artists and producers with a few lesser known artists that the label wanted to promote. The formula worked and the album shot to the #1 spot on Billboard's R&B/Hip Hop albums chart and the #2 spot on the Billboard 200. Of the known names, which also included Queen Latifah, Ice-T, and Johnny Gill, the biggest hit of the album actually came from Christopher Williams, who'd had only two R&B top 10 hits before the soundtrack was released. Williams (who also appeared in the film as Kareem Akbar) repped for the light-skinned, wavy-haired brothers with his first and only #1 R&B hit "I'm Dreamin'."

We also have the soundtrack to blame for the success of Color Me Badd. Their "I Wanna Sex You Up" was infamously used during the scene whe
Gee Money's girl (a skeezed-up Tracy Camilla Johns of She's Gotta Have It fame, for you trivia folks) played him for Nino. It also spawned a major hit, with the single not only hitting #2, but also launching the group's debut album (and helping to secure their own spot on our Class of 1991 list). The other new artists on the soundtrack didn't fare as well. Danny Madden ("Facts of Life"), Essence ("Lyrics 2 the Rhythm"), and F.S. Effect ("Get It Together" [Black Is Force]") all deliver great songs, but nothing quite as memorable as the bigger names.

As a film and a soundtrack, New Jack City ushered in a trend that would prove to take hold of the rest of the decade. The event movie/soundtrack would continue with films like Love Jones, Jason's Lyric, The Wood, and The Best Man. Still, Music from the Motion Picture New Jack City was an effective representation of not just the movie, but a great time capsule of the music and the era. Try putting the soundtrack on today and not be transported back to those moments both in the film and in your life.