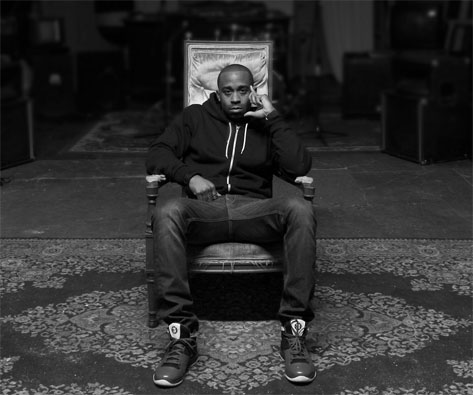 Way back in 2007 when SoulBounce first opened its doors, one of the first Bounce-Worthy artists we profiled was the group Franklin Bridge. The five-piece out of Philly and Jersey was led by singer/songwriter/guitarist Curt Chambers and included Adam Blackstone, Rayfield "Ray Ray" Holloman, "Lil" Darrell Robinson, and Wayne Moore. Within a year the group had broken up because the members got pulled to work on bigger and better projects, and everyone has since worked with a who's who of the music world, including Chambers who some may recognize as Eminem's guitarist and was one of the songwriter for Jaheim's GRAMMY-nominated song "Finding My Way Back." In between touring with Em and continuing to play here and there with Eric Roberson and other indie soul artists, Curt has been busily working on his new solo album, One Way Ticket. He's been in the studio with Ivan Barias of Carvin & Ivan fame and together they are putting soul, rock, pop, and hip hop into a big pot and cooking up some delectable sounds for Chambers, such as what they're serving up the first single from One Way Ticket, "Grass Is Greener." All of the aforementioned genres blend on this track, which you can both rock out and get a good head nod going to as he tries to convince a young lady to give him a chance to show his worth. Curt has also grown as a vocalist turning in one of his finest recorded performances to date. Color me excited to hear more. and the grass definitely sounds like it's going to be greener on One Way Ticket when it's released some time in 2012.
Center