The Internet Invite You To Try Some Of Their ‘Cocaine’

I don't know what's up with the Odd Future and that white girl, but it seems to pop up in their songs a lot. Take for instance the video for The Internet's "Cocaine" (see, it's right there in the title, no pussy-footing around here). The track itself is pretty nice. Sure it's talking about a rather taboo subject, but the production sounds like something The Neptunes would've done during their "Touch" era and Syd The Kyd's sounding as sweet as ever over Matt Martians' production. So while this might seem a lyrical departure from "Love Song-1" or "They Say," it's still operating in the same vein. Now, the actual video for the song is, well, interesting. We follow Syd through a carnival (where we also get cameos from other OFWGKTA members like Tyler the Creator) to meet up with her special lady. After sneaking of to snort some of the titular stuff and pop a pill or two, they walk back through the crowd and hallucinate. Couple all that with a bit of an off-putting ending and you have entertainment that kids probably shouldn't be watching. But, if you happen to be of age, you can check it out below.


TAGS:  Matt Martians, odd future, Syd The Kyd, The Internet, the neptunes, tyler the creator
Previous: Morning Soul: So You Got To Keep It Realer Next: J*DaVeY Wanna Know “Whatchalookin@” 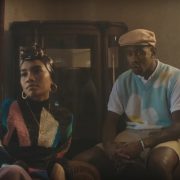