Janelle Monáe Shows Us What A Prize She Is 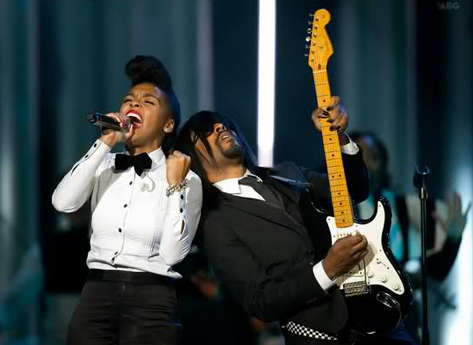 Recently, word got out that Janelle Monáe was working on not one but two new albums to be released in 2012. Sure, we know such back-to-back releases never materialize (ask Maxwell and E. Badu), but as long as she doesn't go all Chinese Democracy on us with the second planned 2012 record, I'm willing to make do with just one new Jenny Money album next year. To say I'm excited about a new Monáe effort is putting this pretty mildly. Exhibit A: her showstopping performance at the 2011 Nobel Peace Prize Concert. At first, I wrote it off as just another mini-set of her performing the same songs, the same way, for the umpteenth time. But I was pleased to find that she may have gotten over whatever it was that marred her performances since she burst onto the periphery of the mainstream with "Tightrope."
Center

With a stronger live vocal than I've heard since her pre-ArchAndroid days (and that includes her compelling if imperfect GRAMMY performance), and backed by a sublime orchestra, it was like hearing The ArchAndroid tracks for the first time again. And with her robust Wondaland Arts Society band (complete with a chair-dancing string section), led by the formidable guitarist Kellindo Parker, she gave us a visual treat as she rolled from one track to the next, slowly pulling the staid crowd onto its feet until they looked like there was a Baptist church revival (or at least an Anglican praise worship) out there in Oslo.

That is, to say, this chick is bad. And considering she also covered the Jackson 5 classic "I Want You Back," say it with me: Real bad. Michael Jackson.