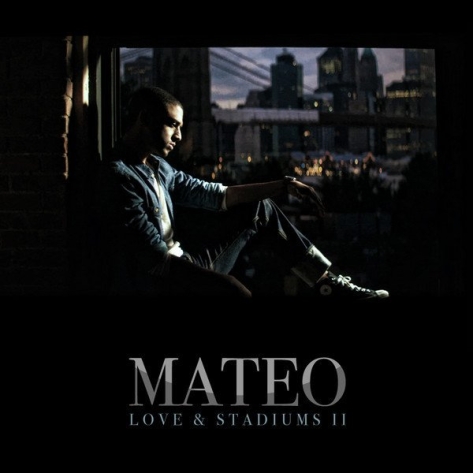 For many, "Say It's So" might've been their first introduction to pop/R&B singer Mateo, but he's not new to the music scene by any means. He was originally a signee to MySpace Records and has since worked behind the scenes with quite a few artists (including SoulBounce fave Jazmine Sullivan and Dawn Richard). That experience is put to good use on his EP Love & Stadiums II. The pop balladry on the seven-song set is excellent. However, being that it's such a small amount of songs, it's a bit too ballad-heavy. Still, it does have its shining moments.

Mateo leads the collection off strong with single "Say It's So." Its pop sensibility coupled with the heavy hitting hip-hop drums (not to mention Alicia Keys' backing on the chorus) definitely makes it memorable. However, it's the stripped down and vulnerable "Love is a Gun" that leaves more of a mark. Here, we get to really see what exactly Mateo's songwriting is made of, and its narrative and melody is strong. This is followed by "Don't Shoot Me Down" (I can only assume this was done with tongue firmly in cheek). While I think the song is great, especially with its inclusion of Ab Liva and Goapele, I'm not sure why this was included here when it already got shine on the Love & Stadiums mixtape in March of this year.

The highlight of the set is "Doubt," which is the first glimpse we get of Mateo doing something different from his peers. Mixing a bit of '80's R&B slow jam with the wall of sound we'd more associate with an act like Kanye West. If Mateo keeps mining music in this direction, I'm really hopeful to see what else he'll bring to the table. Unfortunately, he loses the momentum he gained with "Doubt" on the following tracks, "A Fool For You" and "In Your Arms," both of which have good intentions but just don't resonate as well. The final track of the EP is a dance remix of "Get to Know Me," a single from his MySpace Records days. While the electro-pop re-imagining is definitely dance floor worthy, it detracts from the initial sentiment of the song and, in my opinion, misses the mark.

Love & Stadiums II is definitely a bit uneven, but the things that work here really work. Though I found myself wishing he'd given us a couple of more uptempo tracks to really show his range as an artist, I still enjoyed the majority of it. If nothing else, it shows the potential that Mateo has to make an even bigger name for himself as his career progresses.