Robin Thicke’s Latest Is Hit Or Miss, But Heavy On The ‘Love’ 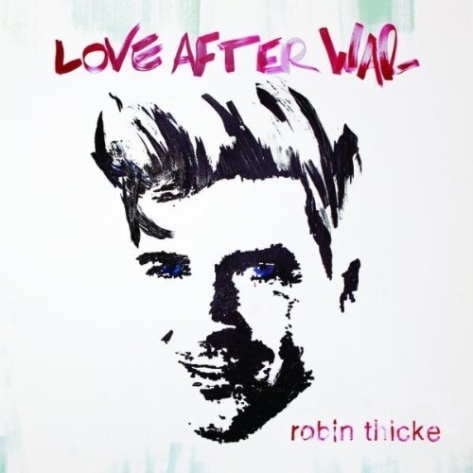 Robin Thicke has come a long way from his shaggy-haired Cherry Blue Skies days. Now more of a debonair playboy than a wild child singing love songs, Thicke seems to have spent the last few albums trying to solidify himself as a blue-eyed soul loverman. His latest offering, Love After War, finds him trying to marry his slick new sound with notions from his early days to varying degrees of success. While it doesn't quite succeed in its goal, it's still a solid effort.
Center

The album starts off a bit rocky, though. The first three songs, "An Angel on Each Arm," "I'm an Animal," and "Never Give Up," just don't work and feel bizarre when put in context of the rest of the album. Further, the symphonic accompaniment on "Never Give Up" reminds me of the music from the "Beef, It's What's For Dinner" campaign. I half expected him to recite a recipe for steak in the middle of it.

Thankfully, he finds a sweet spot with "New Generation." The lazy horn sample and uplifting lyrics are perfect, and Robin climbs down from his falsetto to his raspier normal register for a welcome change. The title track is also a highlight, with him channeling the feel of El DeBarge for the break-up-to-make-up groove. It also sets up a nice string of great songs that include the sultry "All Tied Up," the Lil' Wayne-featuring "Pretty Little Heart," and "Tears on My Tuxedo."

Unfortunately, the aptly-titled "Boring" proves prophetic for much of the rest of the album. With its name dropping and lulling groove, it's an instant trip to Snoozeville. The momentum doesn't pick back up until near the end on "I Don't Know How It Feels to Be U." It's old-school soul sound is probably the best we've heard from him since his Evolution days. The last few tracks on the regular version of the disc, "Cloud 9," "Lil' Things," and "What Would I Be?" are much slower and lovey dovey, but their sentiment is heartfelt and touching. If you pick up the deluxe edition, you'll also be treated to a much more grown-up remake of his own "Stupid Things" as well as "Compass or Map" and "We a Family." Really, "Stupid Things" is the only song that is a have-to-hear bonus track, its re-imagining of his Beautiful World predecessor improving an already great song by removing the falsetto, making it more of a blues song than the flowery R&B it was.

Love After War is not a bad album by any means. At 17 tracks (20 if you count the bonus tracks), however, it could've stood some editing. I think the album would have a much better flow at, say, a leaner 12 to 14 tracks instead of the bloated album it is now. Still, if you cull the gems from the album's weaker moments, you're sure to enjoy what you hear.