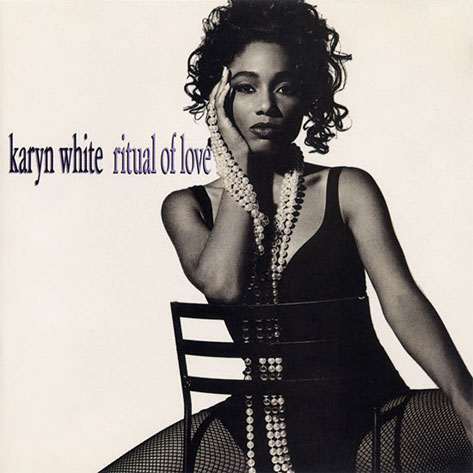 "Superwoman" was the feminist fist pump heard 'round the world in 1988 and in turn made sure that all eyes and ears would be locked to the voice behind such a proclamation. Karyn White was that voice who with a posh air and sugary sweet demeanor classed up the New Jack Swing scene giving a lady-like edge to a genre that had, for the most part, been a "guy" thing.
Center

Racking up four top 10 hits in total, her biggest seller being "Secret Rendezvous," White found herself right in the throes of the crossover market -- and she was just warming up. Stepping into the '90s she waved good-bye to Babyface and L.A. Reid, the sultans of sound behind her debut album, and said hello to Jimmy Jam and Terry Lewis who were now handling at the production end for her follow-up. With Ritual of Love, Karyn White further straddled the lines of R&B and pop, and somewhat (and oddly) lost people in the process.

Well, she didn't lose me.

In fact, the genre jumping assembly of tunes, Jam and Lewis' always-spot-on production, and the genuine state of White's animated performance, always keep me coming back to this slick little album. White is in full New Jill-ster mode as she cooks up some real sauce n' sass on "Romantic". It seductively crackles proving that it had every right to be the big hit that it was. To keep "Romantic" on its toes is the title track, which mixes in tribal beats and a boldness that poises White to be a dance maven. Yet, opportunity for that was dashed, as it still baffles me as to why this song was never released as a single. "Hooked On You" dabbles in some Prince-y business with its percussive backing, yet plays quite coy, as does the steamy, "How I Want You." Personal favorite, "The Way I Feel About You" is sunny-side-up and fluffy (just hold the salt n' pepper) and it's Karyn's delicious moment at pop glory as it's the poppiest thing she's done since her big break way-back-when assisting Jeff Lorber on 1986's "The Facts Of Love."

White's forte is ballads and she doesn't hold back as she let's her voice do pure ministry when slipping into such tender hooks as "Tears Of Joy" and the pop lush of "One Heart." "Do Unto Me" plays like "Superwoman Part II" complete with swirling strings, backing choir, and a climax fit for a singing diva. A grower for me was "Hard To Say Goodbye," which possesses layers and sound textures that only Jam and Lewis could conjure up, and it closes out the album on a high note.

Though Ritual of Love has White effectively finding a merge between R&B and pop, Jam and Lewis' production on Ritual tends to teeter into a Janet Jackson state of mind -- which is where people got lost. It's highly understandable as the two are responsible for Jackson's signature sound, but somehow a lot of the material on Ritual feels Rhythm Nation-lite, and that got the critical whip cracking. The most glaring example is "Walkin' The Dog" as it begins with a rousing growl that is talking 'bout them 'nasty boys', but it even out-dates itself once the obligatory early '90's rap comes in and the track derails midway. She's back on track with "Love That's Mine," which yes, has the same industrial waltz as something off of Rhythm Nation, yet it's tempo-changing arrangement winds up being another personal favorite and another track that should have seen some chart action.

So is Ritual of Love the "difficult" second album, the sophomore slump, the second banana? Figures will have you thinking a slow "yeah", as Ritual of Love didn't have the runaway success that its predecessor had, never the mind that the saucy single, "Romantic" became White's first (and last) #1 Hot 100 hit, and fourth #1 R&B hit, while follow-up single, "The Way I Feel About You" hit at a lofty #5. Still numbers and critical sneers always make the situation of enjoying an album fussy, and enjoy this album I do even with it's tiny flaws. Still Ritual accomplishes its feat to give White a broader sound, lots of sex appeal, and actually sets herself up to take on her contemporaries such as Jody Watley, Pebbles, Mariah Carey, and yes, even Miss Janet Jackson herself, and I think she did it all quite gracefully.

Don't think for a second that the last we saw of Karyn White was in the '90s (to-date 1995's Make Him Do Right was White's last chart appearance), as she's gearing up to take next year on with an new single ("Sista Sista") and album entitled, Carpe Diem. From first listen to "Sista Sista," she's still championing it for the ladies and being the classy dame she always was.


TAGS:  babyface, Class of 1991, janet jackson, jeff lorber, jimmy jam, jody watley, karyn white", l.a. reid, pebbles, terry lewis
Previous: What The Game’s Been Missing: The Keytar Next: Morning Soul: No Matter Where You Go, There You Are