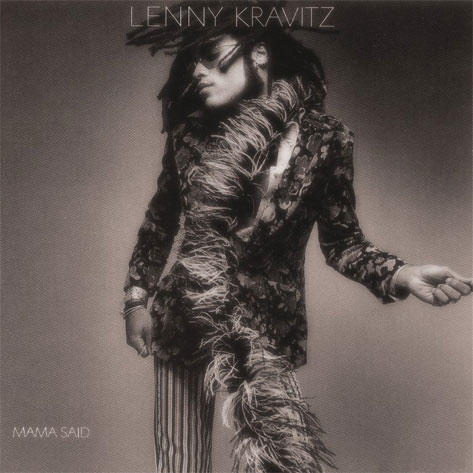 I have a confession to make. I was waaaay late on the Lenny Kravitz bandwagon. When his sophomore album, Mama Said, was originally released, I turned a blind eye and a deaf ear to it. All I had known about him at the moment was that he was Denise Huxtable's rocker hubby and baby daddy. It wasn't until the album's second single, "It Ain't Over Til It's Over" crossed over onto R&B radio that I even took notice of his music. Even still, it wouldn't be until years later, following the release of 1998's 5 that I would back pedal and realize the error of my narrow-minded ways.

After falling for Kravitz and his brand of soul-infused rock on 1993's Are You Gonna Go My Way?, I considered myself a fan. I made it a point to purchase every album he released from that point on. However, it wasn't until coming across Mama Said while digging around a used CD shop (remember those?!) that I finally added the album to my collection. I remember like it was yesterday the point at which I realized I had done myself a massive injustice at not giving this album a chance sooner. Though I had been grooving to it in the car from the moment I left the store, it wasn't until I was idling at a stop light that I really heard the album. It was the jarring sound of pain in his voice on "All I Ever Wanted" that grabbed my attention in a vice grip. Always one to appreciate a good love song, it hit me that this was the song about those moments after the love was gone. It was hard to ignore the anguished ache in his voice, as he screamed his way through the song, bemoaning the end of his troubled relationship. Unlike his errant lover, I was all in.

For the most part, every song on the album centered around the demise of his marriage to former Cosby kid, Lisa Bonet, making Mama Said a gut wrenching play-by-play of what Kravitz felt as the love story of two bi-racial kids, who seemed to have everything in common, came to a screeching halt. Having an artist draw on personal experience was far from being a novel idea, however what set this album apart was Kravitz more or less made it the entire album's focal point.

Suddenly, "It Ain't Over Til It's Over" made a boat load of sense to me. The song, which my mother and I had sung along to while riding in her car years earlier, had been steeped in the real life fight Kravitz had found himself in. That true life pain would prove musical gold for the young artist, as fans around the globe sat up and took notice. It became the first song of his career to crack the top 10 of the Billboard Hot 100 chart and remains his best performing song to date. In the midst of his pain, he proved that there was much more to him than met the eye. Beyond his hippie-rocker exterior was a man who clearly had a healthy reverence for classic soul. With its classic strings and '70's-infused horns, "It Aint Over Til It's Over" could have easily been a holdover from Philly soul's heyday. In fact, the horns didn't just sound like the horn section from an Earth, Wind and Fire song; Kravitz had actually enlisted the help of EWF's real brass section, The Phenix Horns. The resulting sound would introduce him to an audience that was much different from what he had previously attracted. It was added to heavy rotation on urban radio, with the video, a simple show of Kravitz singing his heart out on a soundstage with a band behind him, even finding a place on BET.

Other songs that spoke to Lenny's heartache included the equally heart-wrenching "Stand By My Woman" and the somber "More Than Anything In This World." On both, listeners found a repentant Kravitz, full of sorrow for the errors of his ways, perhaps too little, too late. The album played like a diary of sorts, capturing all aspects of the healing process, including the self-reflection that often intertwines itself with the feelings of regret and longing.

It wasn't just sad love songs that took center stage on Mama Said, however. Lenny tapped into his inner Curtis Mayfield on "What Goes Around Comes Around" and paid homage to Jimi Hendrix on "Always On The Run," tapping Guns N' Roses guitarist Slash for his skills. He also plays the role of loving dad on "Flowers For Zoe," a haunting tribute to his then-infant daughter.

Time heals all wounds, as we all know. Lenny has gone on to achieve great success, both on the charts and on the big screen, while his ex-wife Bonet has drifted in and out of the public eye. Daughter Zoe has grown up, taking a page from both parents, dabbling in both acting and music. Even still, Mama Said serves as a poignant reminder that sadly, once upon a time, a relationship ran its course. Lucky for music fans, Kravitz poured it all out on record.


TAGS:  Class of 1991, curtis mayfield", EWF, guns n' roses, jimi hendrix, lenny kravitz, lisa bonet, slash, The Phenix Horns
Previous: We ‘Co-Sign’ SWV’s Return Next: Morning Soul: I Remember When You Were Here And All The Fun We Had Last Year