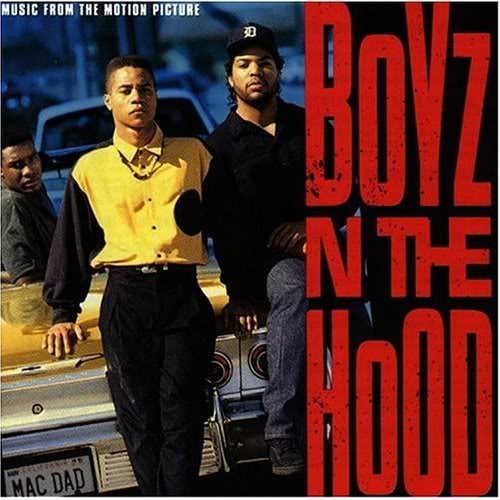 The summer of 1991 provided quite a bit of education on African-America for those actually paying any attention. If you can look past the entertainment, rap music, and burgeoning black film directors finally getting regular runs in major film productions and theatres, Reganomics' impact on Black families was well documented with New Jack City, Jungle Fever, and Boyz N the Hood. Subsequently their soundtracks provided a score for more than just their films, but some of the evolution in black music.
Center

N.W.A.'s arrival in 1989 was a huge part of the rest of America's understanding of hard living in L.A., from crack to gang banging to police brutality and the bubbling under angst many young blacks carried as a result of all the above. The most visual and vocal of N.W.A. was Ice Cube, proven when he successfully went solo the following year with Amerikkka's Most Wanted. It might have been as unheard of to get gangster rap out to the masses as it was getting a film like Boyz N the Hood on screen. I'd like to think O'Shea Jackson is largely owed for both these things. He was one of the most intense, if not scariest brothers on screen, and we loved him for it. He was that one cat you KNEW wasn't gonna take crap from ANYBODY: whites, cops, or other brothers "in the hood."

The soundtrack was very much influenced by Cube's "Dough Boy" character and rap songs he'd already released. Leading of with the ingenious, yet hilarious "How to Survive in South Central," Cube introduces you to "the West" atop a killer '80's sample. The one hit single the album produced follows from Tevin Campbell with "Just Ask Me To," but the truth is, the tune has nothing to do with the film or soundtrack's theme and was clearly a sales piece for the soon-to-be-released solo debut of young Tevin by the soundtrack's label, Qwest Records. Cube's protégé Yo-Yo returned to the theme, flipping a twist on "Brick House" and "Papa Don't Take No Mess" with "Mama Don't Take No Mess," sampling film drops from Dough Boy's mother among others. Next up, Compton's Most Wanted deliver one of the soundtrack's greatest productions, if not one of the best West Coast rap songs ever. "Growing Up in the Hood" brilliantly merges two takes on the film's characters, samples two of hip-hop's grittiest and respected voices in Cube and KRS-One (also bridging East and West corner realities), and does all this over a blend of sampled and original funk music.

Keeping it West, but smoothing it out, Oakland's Tony! Toni! Tone! (though officially Raphael Wiggins' [aka Raphael Saadiq's] first solo song) hand in "Me and You," the soundtrack's most revered tune to this day. Though never released officially, the tune helped push the soundtrack to gold within months. The incomparable John T. "Jubu" Smith's acoustic guitar playing and solo was one of the rare gems found in black music in the early '90s as live instruments began to erode.

While the next few names were already familiar ones, Monie Love, Hi-Five, 2 Live Crew, and Too $hort did little to keep up the hit material for the remainder of the album. Alhough Monie's "Work it Out" might've done her soon-to-be prematurely-over career some good as a single in its own right.

Two additions to this soundtrack always boggled my young mind when I got the CD back in the day: "Spirit (Does Anybody Care?)" from Force One Network (featuring a then unknown David Hollister [aka Dave Hollister] on leads) and "Setembro" from Quincy Jones featuring Take 6 and Sarah Vaughn. I mean, I get maximizing on your own catalog, Q, but really? We already "got" this with Back on the Block two years prior, and "Me and You" was all the "hood love" we needed. And as great a singer we know Hollister to be now, "Spirit" was corny even then. Not like a "Don't Shoot Me" kind of Take 6 fit to Do the Right Thing, you know?

The soundtrack wave was on and popping for sure with Boyz N the Hood following behind New Jack City being a number one package of various artists for various labels over the next few years to follow. But its was over sooner than the movie's ultimately, wheras the artist's contained inside almost all went on to further success. Cube would continue to be a major force in music and film for the next four years consistently, recording five consecutive platinum releases and filming four major films in as much time. Film director John Singleton went on to be one of the youngest ever nominated for Best Director at the Academy Awards and the first African American ever nominated for the award itself. I was glad that with this film and soundtrack that the world got a taste of the hood.