The Soul Rebels Give Us ‘Sweet Dreams’

A cosign from Jools Holland and his Later ... With show is seen as quite a big deal, especially here in the UK. Just looking back at a handful of the acts he's featured over the last few series shows that he is a man of impeccable, if somewhat eclectic tastes. So it should come as no surprise that he has picked up on eight-piece New Orleans collective The Soul Rebels (aka The Soul Rebels Brass Band). Having already featured on hit US TV show Treme, it seems the guys are set to make waves on this side of the pond, too, after giving a rousing performance of the Eurythmics' "Sweet Dreams." If you dig this, then check out their free Unlock Your Mind EP, that we featured a while back.

Morning Soul: Cooler Than Ice Cream & Warmer Than The Sun 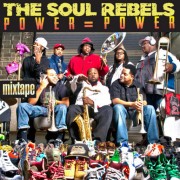 The Soul Rebels Prove They Have The ‘Power’ On New Mixtape