Catch Up With The Internet In ‘Fastlane’

It's been a little over a month since Odd Future's The Internet dropped the digital version of Purple Naked Ladies in our laps. If their first video for "Cocaine" for raised a few eyebrows (and elicited some rather interesting comments), then their video for "Fastlane" will probably do the same. The song, one of the standouts from the mixed bag that is PNL, is an effective metaphor of love as car traffic. The video, however, acts as a prequel to "Cocaine" with Syd The Kid and her video girl going on a hyper-violent, gun-toting and bloody Bonnie and Claudia crime spree in the desert. Does this have anything to do with the subject matter for "Fastlane?" Not really, but damn if it isn't entertaining. It also makes the random cruelness at the end of "Cocaine" make a bit more sense. Though Purple Naked Ladies is available as a digital download now, a physical deluxe edition will be available at month's end.


TAGS:  odd future, Syd The Kyd, The Internet
Previous: Watch Jayanti ‘Get It On’ As She Covers The Classics Next: Emeli Sandé Got ‘Next’ 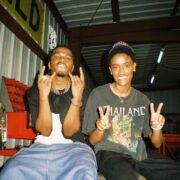