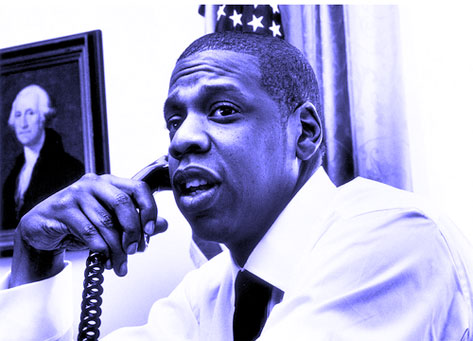 After damn near making the internet implode on Saturday night with the news of her birth, Blue Ivy Carter continues to make headlines and is even making beautiful music. Less than 48 hours after her much heralded birth, proud papa Jay-Z posted the song "Glory" on his Life + Times blog today with a simple picture of the Empire State Building bathed in blue light and the caption "Life just got REALLY good." Yes, it has and so has his music if we are to take "Glory" as an indication of the well-spring of creativity that his daughter's birth has brought forth. President Carter is spitting some of his best rhymes in years on The Neptunes-produced track as he paints us a sad yet hopeful picture of numerous attempts for wife Beyoncé to get pregnant, at least one miscarriage, the uncertainty if Blue would make it to term, and, finally, the birth of destiny's child. The track culminates with the sounds of little baby Blue's newborn cries before fading to black. This is simply beautiful and utterly heart-warming.
Center