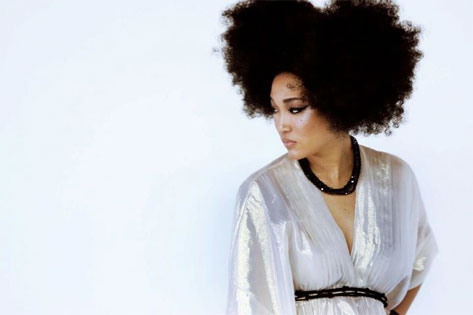 You may recognize Judith Hill from providing supporting vocals for the late, great Michael
Jackson
. Or might recall her when she moved from the background to the forefront and sang the duet "I Just Can't Stop Loving You"
with him in This is It (while holding her own with some amazing runs, I must add). Or maybe she's familiar to you from
her touching performance of "Heal the World" at MJ's funeral. I loved hearing her sing the
King of Pop's songs, but I'm thrilled she is now singing her own material and we'll soon get to hear more. Earlier this week, she lit up
the stage at the Sundance Film Festival in Park City, Utah, performing music from the soundtrack to Spike Lee's
upcoming film, Red Hook Summer. Lee handpicked Hill for this project, and she
wrote and performed original songs for the soundtrack. Now we have a reason to anticipate the soundtrack
as much as the movie's release. When was the last time that happened? Until it's time for both to be released, check out Judith Hill around the web and peep her EPK after the bounce.