Ashanti Continues To Show That She Has ‘Nothing’ 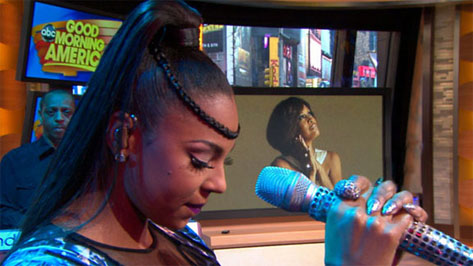 Okay, look. The world has suffered an immensely tragic loss this week. And as with any tragedy, those affected by it are bound to express their pain in a host of ways. We're hurting. So we're going to see that hurt translated into many different forms of coping. Some cry it out on national TV, some get it out via social media, some eat the ashes of their loved ones. All of this is okay and only speaks to the Whitney Houston's influence and relevance.

Some people cut themselves to cope, while others sing it out. Fine. I hear people comment that we shouldn't judge such tributes based on their similarity to the original, but by the quality of the singer's performance alone. It's the thought that counts, dammit! The artist is selflessly offering unto their world their personal expression of gratitude. That's well and good and peachy.

Unless, of course, your name is Ashanti, in which case any possible outcome is bad.

Monday, R&B's most aggressively relentless outbreak in a skirt hoofed it up on Good Morning America promoting her new single, "The Woman You Love," also adding her drop to the growing pail of Whitney Houston tributes. Dressed as the lead performer in House of Dereon On Ice, donning that Dastardly Forehead Braid of Doom -- the work of a person who likely also championed Alicia's reverse cornrows -- she emoted and howled with the grace and precision of a warthog on the prowl. Upside: glad to see her signature eighth-grade talent show swag is still on two million hundred dozen. A+ for consistency.

What hurt more than even being reminded of her existence and impending return is being taunted with news of a live performance. Picture it: Ashanti, doing something for Whitney other than hand wash her wigs. The song choice, "I Have Nothing." As I commented upon hearing the news, having Ashanti tribute Whitney is like having 2011 Britney tribute Velvet Rope era Janet. The wound is still fresh. Too soon for jokes. Show some damn respect, GMA. She's done the song a number of times, so I attribute this rendition to some higher power bestowed upon her by that forehead braid. Some call it endearing, but I prefer "insulting." Any intended sentiment was flattened and pulverized with her notes. It's hard to think positively when all I can think is: Hives. That, and she definitely says that she will "always love shoe." Jesus be a tranquilizer dart, a box of Artistic Growth, and a muzzle.

An Edible Arrangement sent to the Houston family would have sufficed. Check it out for yourself.


TAGS:  ashanti, Britney, good morning america, tragedy, whitney houston
Previous: Morning Soul: I Remember The Way That We Touched, I Wish I Didn’t Like It So Much Next: ‘Get’ Some Mary Mary In Your Life