Le’Andria Johnson’s ‘Evolution’ Is Worth Witnessing 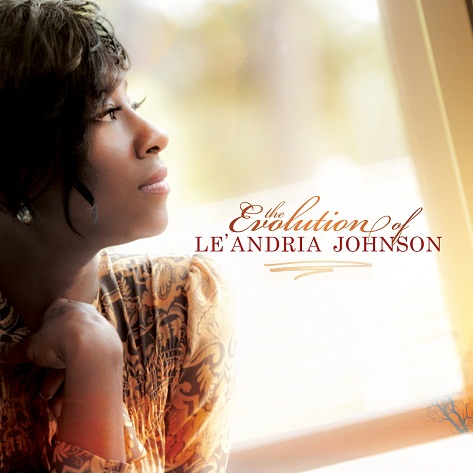 On Sunday night, during the GRAMMYs pre-telecast awards ceremony, Sunday Best winner Le'Andria Johnson took home her first GRAMMY for Best Gospel/Contemporary Christian Music Performance for her song "Jesus," the first single from her debut The Awakening of Le'Andria Johnson. The song, a welcome blend of old and new gospel styles, was indeed award-worthy, as are Le'Andria's blessed vocals. As if that didn't make this already a great week for the artist, she now builds upon the success of The Awakening with today's release of The Evolution of Le'Andria Johnson, a very worthy successor to her award-winning debut.
Center

The set opens with the uplifting "It's Gonna Be Alright," this project's lead single. It's an inspirational and funky cut in the tradition of her Sunday Best judges Mary Mary and Kirk Franklin. Like Mary Mary's "Shackles," it's easy to picture "Alright" making it onto the playlists for gospel and R&B stations alike. The more traditional "He Was There" seems put there to ease the fears of those thinking that "Alright" was a bit too R&B. While it's a beautiful testimony, there's nothing -- besides Le'Andria's powerhouse vocals -- that differentiates it from every other gospel song out there.

The Raphael Saadiq-produced "Let It Go" is more gospel masquerading as R&B and is perhaps one of the finest moments of the set. It's simple piano buoyed by a thick-as-molasses bass line is a great accompaniment to Le'Andria's voice and the song's message. Like Erykah Badu before her, Le'Andria encourages ladies holding on to that extra baggage to let go and let God handle their burdens. If this isn't Evolution's next single, then they will have dropped the ball.

"Sooner or Later" and "He First Loved Me" follow and further let Le'Andria shine. "Sooner" starts out as a bluesy gospel affair that then soars as Le'Andria's vocal builds. "He First Loved Me" is a praise and worship song that once again features a strong R&B influence. It's a duet between her and her brother, Michael Johnson, that is kind of a love ballad for Jesus. It's also great to hear her sing alongside her brother -- it definitely proves that musical talent is an inherited trait.

"I Shall Leap" is an expansion of the song she performed while being crowned the winner of Sunday Best in 2010. It's an amazingly inspirational song for those needing that motivation to take that next step. The final song of the set, "Overtaken," is a contemporary gospel stomper full of praise, joy and celebration that's fitting in light of Le'Andria's meteoric success.

In addition to The Evolution of Le'Andria Johnson, her label Music World will also be re-releasing The Awakening of Le'Andria Johnson in a deluxe version that will include the seven songs on The Evolution. So, you can think of this effort as more of a companion to her debut. However, the quality of songs offered here go far beyond that of a companion piece and deserve to shine in their own right. Given her R&B leanings here, though, it'll be interesting to see where LeAndria's career goes over the next few years.


TAGS:  erykah badu, kirk franklin, Le'Andria Johnson, mary mary", Michael Johnson, raphael saadiq
Previous: Morning Soul: The Greatest Love Of All Is Happening To Me Next: You Are In ‘Real Good Hands’ With Gregory Porter