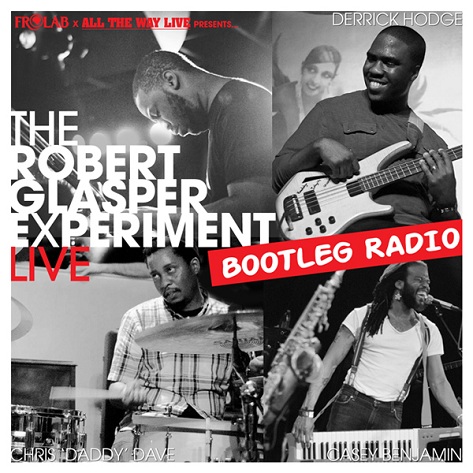 The Robert Glasper Experiment is a name that has been on our lips quite a bit here at SBHQ. And with the release of their much-discussed Black Radio tomorrow, it's almost certain that Robert and crew will be much discussed through year's end. While tomorrow's release will definitely solidify the fact that the Experiment is indeed a force to be dealt with on wax, it should also be well documented that the boys can throw down on stage as well. For those of us in NYC, it's an indisputable truth, but if proof is needed, look no further than the Bootleg Radio mixtape put together by our friends at Frolab and All The Way Live. The compilation features live performances from places like The Blue Note, Highline Ballroom, and the Montreux Jazz Festival. On top of that, it features frequent collaborators like Q-Tip, Phonte, Bilal, Lupe Fiasco, and Yasiin Bey. Sure, it's not catching the Robert Glasper Experiment during tomorrow's album release party at New York's Highline Ballroom (or taking advantage of other opportunities to see the crew live), but it is most definitely the next best thing. Take a listen below, and then go ahead and get the free download as well.


TAGS:  audio, bilal, lupe fiasco, phonte, q-tip, robert glasper experiment, Yasiin Bey
Previous: Take 6 Are Cooking In The ‘One’ Next: Will You Crown Tony Williams The ‘King Or The Fool’?