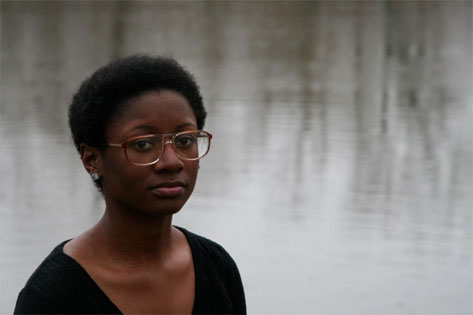 Wednesday morning, while a small percentage of the world celebrated their birthdays for the first time in four years, we celebrated the release of a hidden gem. Martin Park's front-woman Jacque Hammond released her first solo effort, the Lazy Love EP, consisting of five tracks and containing about 15 stripped-down minutes of guitar, piano, saxophone, a few hand claps, and angelic harmonies. Although this offering comes as her initial solo release, it follows almost as a sequel to three solid predecessors. Since 2009, Jacque along with producer and rapper Roman Lee have been pouring out sound after sound (see The Back of The Bus mixtape, Barefoot, and Thankful For Sound) as the experimental hip-hop soul duo Martin Parks, deriving their name from civil rights icons Dr. Martin Luther King, Jr. and Rosa Parks. However, whether you're familiar with the Chicago-bred duo or not, Lazy Love, written and produced entirely by Jacque, stands as a perfect introduction to her incredible voice. Standout tracks include "Simple" and the lead single, "Lazy," which features the smooth addition of background vocals from yours truly and the video for which you can view after the bounce. Give the entire EP a listen below and then bounce on over to Bandcamp to seal the deal with a purchase. "Listen with you heart not your ears. Feel with your soul, lose your fear. Listen with all you are..." Jacque chants on the final track, "Listen," leaving you anticipating her next move. Stay tuned; I guarantee there will be more.


TAGS:  audio, Jacque Hammond, Martin Parks, Rob Milton, Roman Lee
Previous: Was Mariah On Or ‘Off’ In Her First Live Performance In Two Years? Next: LaTina Webb’s Lookin’ Good In Her ‘Honey’s T-Shirt’