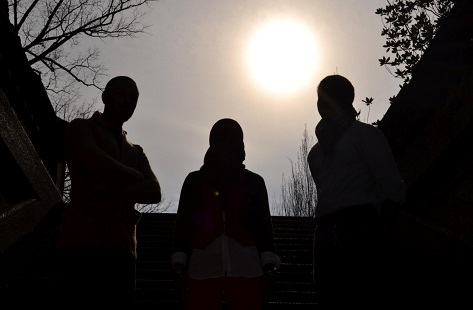 Musical gems are being dropped left and right this year it seems. Here to add to this embarrassment of melodious riches is Columbia Nights. The D.C.-based production duo, comprised of Hayling Price and John E Daise, nursed themselves on the sounds of R&B, electronica, jazz, soul, and hip hop to create unique sonic landscapes that at once throwback to times past and look forward to the future. To further expand their sound, they've enlisted vocalist Sarai Abdul-Malik, who the group met during her studies at Howard University's Jazz Department. The results of this union have been nothing short of stellar. Their first release together was a cover of Little Dragon's "Stormy Weather," from the Swedish group's self-titled debut. Their experimental take on the already-experimental track is absolutely breathtaking. Adding a bit more musical depth to the song (the original is almost an a cappella, with only sparse notes accompanying Yukimi Nagano's delicate vocals), the crew infuses jazz-like grooves into the already beautiful lyrics. Likewise, on their take of George Duke's "Feel," they update the jazz/funk legend's sound. While it's near-impossible to best the musical legend, Columbia Nights succeeds in their cover due to Sarai's amazing vocal and Hayling and John's addition of hip-hop sensibility to the original song's jazz/funk fusion. Columbia Nights is gearing up to drop their debut EP, Dawn | Dusk, this May. Until then, be sure to check out these two stellar cuts to prepare yourself for aural pleasure their debut is sure to bring.
Center