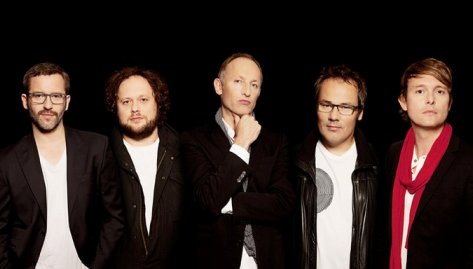 Berlin-based production/DJ collective Jazzanova are off to a flying start in 2012 with the release of not one, but two albums in the first six months of the year. Upside Down was a collection of remixes and reworks of some of their best material by a variety of producers that we deemed a necessary purchase for those die-hard Jazzanova fans. Their upcoming Funkhaus Studio Sessions is an altogether different kettle of fish, with the collective cutting some of their best material live, with a little help from some guest musicians and the vocal talents of regular collaborator Paul Randolph. Fans of '08s Of All the Things will be happy to see album highlights "Let Me Show Ya," "Look What You're Doin' To Me," and "I Can See" included, as well as a funky-fresh cover of one of my favorite tracks from Fat Freddy's Drop, "Flashback" (which Jazzanova originally remixed for them). The album is scheduled to drop May 15th, but you can check out a couple of tracks below to tide you over until then.
Center


TAGS:  audio, Fat Freddys Drop, jazzanova, Paul Randolph
Previous: Morning Soul: Bottle Of Dom Perignon To Get Us In The Groove Next: We ‘L’Amour’ Ntjam Rosie