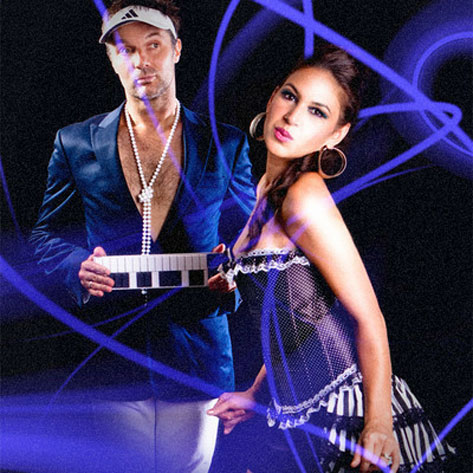 It's common knowledge that the 1980's were a time of indulgence. People partied like 1999 would never come, fluorescent was the new black, makeup was to be used in excessive amounts and the bigger the hair, the better. It was also the glory days of the synthesizer, which like everything else during this era, was overused, so much so that this humble instrument became synonymous with the '80's electronic style of music. This can be a bad thing (think countless cringe-worthy '80's pop hits), and then it can be a very good thing, as in the case of '80's R&B and funk. This was a time when R&B music was sweet and tantalizing, with a groove that made it damn near impossible to not click your fingers and get your break dance on (or at least attempt to). With many bands dabbling in the electronic soul sound recently, but giving it a much more modern twist, it is nice to see a group sticking more stringently to the styling of '80's R&B/funk and delivering carefree, sweet grooves reminiscent of Mtume, Evelyn "Champagne" King and Prince. This group is Australian duo Confection.
Center

With the syrupy smooth vocal stylings of Juanita Tippins and the musical creativity of Josh Beagley, Confection most certainly are indulging in their obvious love of the golden era of synths, and I don't know about you, but I'm happy for them to take me along with them. Having released their self-titled debut album a few years back, which was full of funked up, boogie rhythms like "You Got The Love" and "Fantasisin," they are now gearing up to release their follow up, Private Conversations, due out in late July, led by the first single "Save Your Precious Time," which has a more pop flavor and sees Juanita pleading for her lover to take some time out from their busy life to notice her. A sneak peek of the album is available at the moment via the band's SoundCloud page (or below), and after a listen to the album, stand outs for me include "Delectable U" and "I'd Like To Get To Know You," which reminds me eerily of the Lisa Lisa & Cult Jam hit "I Wonder If I Take You Home."

So while the '60's Motown soul revival has stolen much of the limelight the last few years, it might be time to take a step forward (or is that backwards?) to the '80's era in soul, and let Confection reveal to you their Private Confessions.