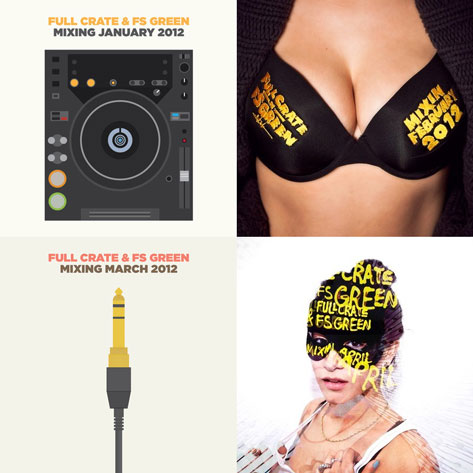 Way back in 2008 -- it seems so long ago, no? -- I stumbled across a website where two relatively unknown at the time Dutch cats posted one mix a month of the best progressive soul and hip hop from both sides of the Atlantic. That website was MixingMonthly.net and those cats were the now SoulBounce faves Full Crate and FS Green. The concept was simple and their execution was flawless, but that experiment in sound sadly lasted only one year before Crate and Green went on to bigger and better. But their monthly mixes were surely missed as I recently realized when I came across the entire year-long collection on my iPod and jammed nonstop for an entire day and remembered the times. However, little did I know until just yesterday that I could have been feeding my Mixing Monthly need with brand new mixes from Full Crate and FS Green who resurrected the series in January of this year. I don't know how I managed to miss almost four months of this new series, but now that I'm awake from my slumber I've fallen in love with Mixing Monthly all over again. And how could I not? These mixes sound like SoulBounce. Listen for yourself to the awesomeness of the April mix below, and keep it locked on the new Mixing Monthly website on Tumblr or their SoundCloud page for the downloadable goods every month. Now if you'll excuse me, I have some catching up to do.


TAGS:  audio, fs green, full crate
Previous: Jermaine Paul Comes Out Victorious On ‘The Voice’ Next: SoundTable Discussion: Who Should Perform At The VH1 Divas 2012 Salute To Whitney Houston?