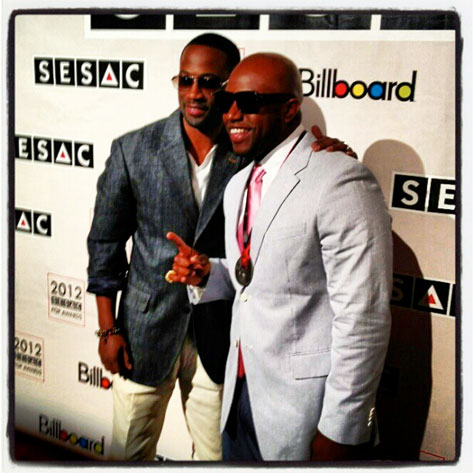 Last night, at the Skylight Soho in NYC, the music industry came out to celebrate a slew of producers, songwriters and publishers affiliated with SESAC at the performance rights organization's 2012 Pop Music Awards event. Among the big names walking the red carpet were Melanie Fiona, Rico Love, Jacob Luttrell, Bryan-Michael Cox and the night's big draw, Sylvia Rhone.
Center

Luttrell, who walked the carpet with actress Jeanette Steiner, was being honored for writing and producing Enrique Iglesias' comeback smash "Tonight (I'm F--kin' You)." You'd be forgiven for raising an eyebrow there, but as someone who spent more time than one probably should in Las Vegas night spots around this time last year, I can unequivocally state that the sound of Iglesias' Auto-Tuned croon at the song's opener was like magic fairy dust (yes, probably MDMA-laced,) to crowds from The Bank to King Ink. On why the song (originally written for Akon) had such an impact, Luttrell commented "because everyone wanted to say that anyway, but nobody ever did" (Zombie Biggie Smalls would probably disagree, but I'm no Miss Cleo). Also, he added, "the fact that it was Enrique saying it" added to its appeal.

Meanwhile, as producer Mykal Snoddy (Lupe Fiasco's "Flashing Lights 2.0"  "Out Of My Head") sampled hors d'oeuvres with a gorgeous, petite woman best described as a balder, cleavage-friendlier Janelle Monàe, a bevy of colorful flesh-bearers bombed the red carpet, posing for any photographer who would mistake them for Melanie Fiona or a double-jointed Pussycat Doll. (And quite a few did.) The real Miss Fiona eventually arrived. And, after posing for photos, was whisked inside to prepare for her set as the night's headline performer. Fine. All the more sashimi for me. 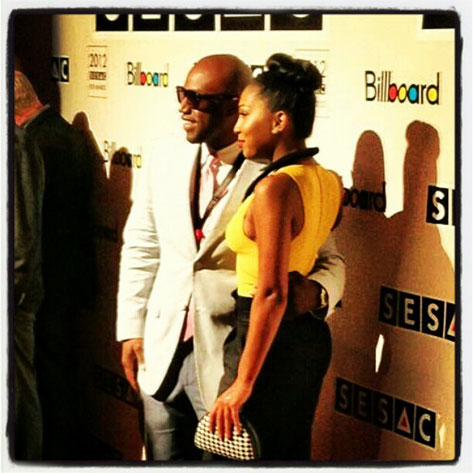 As Rico Love stepped on the carpet, Kelly Rowland's "Motivation" blared from the speakers. After exchanging hugs with a sharply-dressed Q Parker (formerly of 112), he revealed he wasn't even sure what song he was being honored for at the event. But he did feel personally honored to have been a part of the Brandy-Monica reunion single, "It All Belongs To Me."

"It was an amazing thing to work with two such powerful vocalists," he said, adding that while he and Monica have been close friends for years, both women "affected me throughout my career and my youth." And really, once you get past the fact that they're belting their lungs out about Facebook, the song really does grow on you. He hinted at more to come from the melding of his and Brandy's distinctive sounds, saying the duo created an "amazing mulatto baby" on four records for Bran's upcoming album, Two-Eleven.

Meanwhile, as Bevy Smith quizzed Luttrell and Steiner on the nature of their relationship, I caught up with RightsFlow CEO Patrick Sullivan, a wife, two children, and untold millions of dollars richer since our last meeting. (Last December, his company was acquired by Google for an undisclosed amount.) The acquisition was a major gesture to show the labels that Google was serious about helping artists earn royalties from content uploaded to YouTube, so his presence at the event was expected by most. But soon, my attentions were shifted to the statuesque, six-foot Angela Hunte, co-writer of Jay-Z's "Empire State of Mind," who indulged me in a Battle of the Boroughs (the Bronx over Queens and Staten over Manhattan, but Brooklyn over them all). Having penned hits for Fiona, Britney Spears and Danity Kane, she's in the process of preparing her debut as a performer with a sound she calls "Gully Pop," referencing some of the hardships she's faced in life. I excitedly await songs that explore carefree days spent joyriding with the top down, and nights spent playing Russian Roulette with rats in a winner-eats-all game of survival. 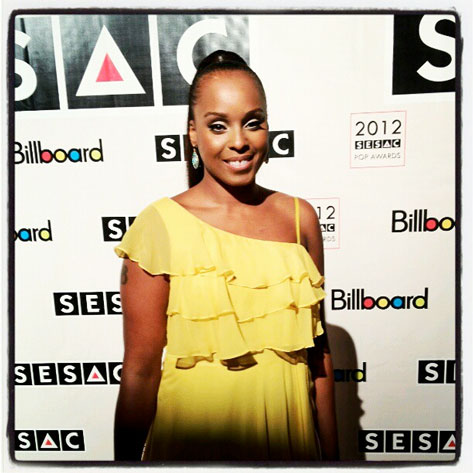 Soon, the strong whiff of power was in the air, as Sylvia Rhone breezed in, gladhanded by every industry figure and hanger-on brave enough to stare directly into her eyes. Rhone, for her part, looked every inch as intimidatingly sexy as you'd hope someone in her position would, dress hugging her lean frame, heels doing great things to her legs. While no new details have surfaced about her upcoming label under Epic records, the generally reverent buzz around her suggested everyone knew who ran SESAC stadium that night.

Soon enough, the announcement rang out for everyone to head into the main hall for the start of the festivities. I cornered a waitress for one three last hors d'oeurve, had the bartender make me his strongest possible vodka martini, and made my way out with Cee Lo Green and Mel Fiona singing unintelligible things about fools in my ear.