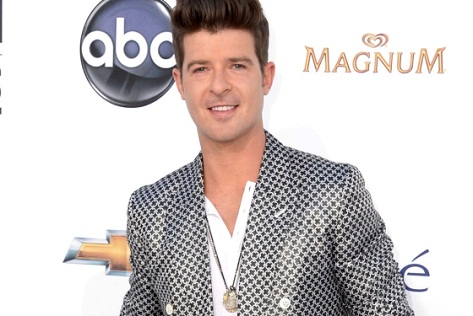 While he may be spending the summer with the likes of John Legend, Kelly Clarkson and Jennifer Nettles on ABC's Duets, that doesn't mean that he doesn't have time to drop new music for the masses. The latest sound from his camp is the song "Top of the World," which he released over the weekend via his website as a special "thank u" to his fans. The track finds the "Love After War" crooner dusting off his rap skills as he tells the story of a woman who's become successful, but has yet to find a love to share it all with. While I'm usually not a fan of singers trying to rap, I'm not entirely mad at Robin's flow on this one. My only criticism is that, though in his usual laid back style, it lacks a bit of the charm that we've come to expect from Mr. Thicke. Still, as a freebie for fans, it's not bad at all. If you want to get familiar with Robin's lyrical flow, take a listen for yourself after the bounce.