Runforyourlife Have Something For ‘The People’ On ‘Vol. 1’ 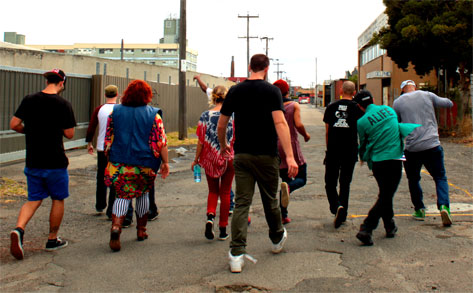 The email subject simply read "Sex, Ball Sweat & Funky Jesus." My interest was piqued, torn between wondering if I was about to unleash some kind of foul smelling virus or be pleasantly surprised, I let my curiosity guide me, and thankfully, curiosity won on this day, as I was introduced to Melbourne, Australia based collective Runforyourlife. This collective, made up of the production team of JSmith, Dutch and Syreneyiscreamy, along with a plethora of special guests, come together on their debut album, Vol. 1, to create a nu soul sound that has a heavy dose of hip hop and electronica.
Center

Runforyourlife hooks the listener in on tracks like the MC heavy "Work
Hard" featuring MCs N'fa Jones, Remi, Zulu Flow and 1/6, the funky and dirty soul/hip hop energy of "Runnin' (Don't Wait)" featuring Nadee and the electro soul sound of "Bumps." But where they stand out is on tracks where we see them stripped back a little, showing us their softer side, such as on "The People," where smooth vocals and harmonies float over lush beats. Vol. 1 sees RFYL come out guns blazing, with 13 tracks that show just how much talent this Melbourne collective has, and they make no
apologies for it. Have a listen to "The People" below, and head over to their Bandcamp page to get the rest of Runforyourlife's gritty musical take on life on Vol.1.