SoundTable Discussion: Who Should Perform At The VH1 Divas 2012 Salute To Whitney Houston? 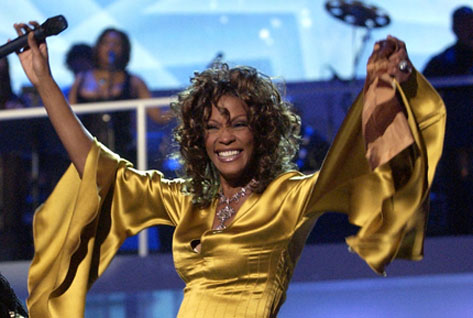 VH1 has announced that the next installment of the Divas franchise will be a salute to Whitney Houston. The special won't air until December and there are no details that have been revealed thus far other than Whitney's long-time musical director, Rickey Minor, will also be the MD for this live event. To say that we here at SoulBounce HQ are waiting with baited breath to hear who will be performing on this tribute is a gross understatement. We have quite a few demands suggestions about who needs to perform that night to do Whitney justice -- and those artists who need to watch it on television like the rest of us. If done right, this could go down in television history alongside Motown 25. If done wrong, then it will just be a big fat fail, which no one wants. We're cautiously optimistic, but if anyone at VH1 is reading this and needs some casting guidance, then hit the bounce to find who we'd love to see and hear paying tribute to the one and only Whitney Houston. Everyone ain't able.
Center

Butta: So the next VH1 Divas will be a Whitney Houston tribute. Jesus, hold my mule. My whole thing is, I know that this isn't until December, but Whitney hasn't even been in the ground five minutes yet. Let that woman's death cook.

AudioDiva: Whitney ain't even kindling wood yet and already a tribute...damn.

D-Money: I understand that sentiment, but you know they're not gonna let her body get cold before they turn that profit. Hell, people were mad that there wasn't a full-out tribute at the GRAMMYs a little over 24 hours after her death.

Butta: Well, since this is happening whether we like it or not, who do we want to see on there? Time for some dream casting.

SoulUK: Ledisi, Kelly Price, Chaka Khan. Maybe Sy Smith as she once did her background vocals. Lalah Hathaway could put a unique spin on a Whitney classic, too. But watch Rihanna get a nod. SMDH

Lady J: SoulUK, I'm with you on Ledisi, Kelly and Chaka. I'd add Monica to the mix. I heard her sing a snippet of "You Give Good Love" and it gave me chills. As much as I want to like Christina Aguilera, please leave her out of this. I don't want to hear her scream and run her way through a Whitney classic.

D-Money: Christina would be a horrible choice. Do. Not. Want.

But now you know this is going to go all the way wrong. Alicia "I Can't Write Songs in My Own Key" Keys is gonna murder (in a bad way) one of Whitney's earlier ballads. Mary J. "I Can't Quite Find the Key" Blige is gonna do a praise and worship number with Aretha Franklin (and maybe Dionne Warwick). They're gonna get some blue-eyed soul singer who has no business being there (but has an album to promote) to do a song they can't possibly sing correctly and so on and so forth.

If I had my way? Amber Riley (she's killed all the Whitney songs she's done on Glee), Kim Burrell, Kelly, Chaka, Mariah Carey, Lalah and Ledisi. Maybe Brandy and/or Monica since they both shared a bond with her.

Remi: Maybe not even blue-eyed soul, per se. Florence Welch and Jessie J may return. Still, give me them over Joss Stone. They will probably call in Adele, despite not really being a good fit.

But speaking of "if I have my way," Chrisette Michele is fantastic when she isn't trying too hard. But there's little hope of that being the case at a Nippy tribute.

Agree on Bran and Monica. In fact, of they aren't included, heads must roll. Was also gonna say Mariah, performing anything other than "When You Believe (Only An Oscar Can Fill the Hole in Your Life)." Something like "Saving All My Love" or, depending on where her voice is that day, "All The Man I Need." If she's in top form, she could tear the roof off that song.

SoulUK: Jessie J needs to stay the hell away. :-/ She is currently making me want to smash my TV on the UK version of The Voice. Her doing Whitney would tip me over the edge.

D-Money: Oh, I forgot about some others, like a Deborah Cox or a Tamia. Oh, and Tamyra Gray. Her and Kelly Clarkson did a pretty good cover of "Exhale" after Whitney passed.

Butta: I agree with many of the names tabled thus far.

I'll also throw an American Idol alum segment into the mix with Jennifer Hudson, Fantasia and Syesha Mercado. JHud because it's expected. Fantasia because she'll do something unexpected. And Syesha because she can blow, but she's so under the radar it's criminal. As quiet is kept, if they end up doing this ill-advised Whitney biopic sooner than later, that's who I would cast in the role.

D-Money: I forgot about Syesha. And, yeah, she should totally be the one to get the part. She was great in the Dreamgirls stage revival.

Fantasia is another who should not be anywhere near this. Sure, she can sing, but no.

Rob: If we're leaving out Mary, Monica should stay home, too. Kim Burrell should definitely be in the number.

Butta: Yes, love MJB, but she needs to sit this one out. It likely won't happen, but we can dream. Patti LaBelle and Aretha for sure.

D-Money: Patti and Aretha should definitely be in it, but I honestly can't imagine either one singing a Whitney song. Maybe the gospel segment.

Remi: No, Monica needs to be in there. Brandy definitely. She'll bring emotion, vocal prowess, and restraint where necessary -- the latter being something neither Monica nor Hudson can be trusted with. And MJB's just 1 for 3 in those stakes.

Alicia would be a mess, and Beyoncé, though vocally perfect, would just punctuate her performance with a series of growls in the sad attempt to approximate actual human emotion. Not as big a Ledisi fan as any of you, but agree she can sing pretty much anything and would be great here. Kim Burrell and Kelly Price are also great choices. Actually would like to hear Dawn Robinson or Maxine Jones from En Vogue on this. Either a ballad or actually a killer four-part harmony on "I Wanna Dance With Somebody." Lizz Wright could probably also do something good there. With her timbre, she or Toni Braxton (try to remember her before her sisters went all "Dawn of the Dead" on our pop-culture landscape) would do "Exhale" justice.

Oh, the possibilities. Too bad it will all just end up as Dontedamus prophesied in the great screed of 5/9/12. And it will bring on the apocalypse, just when the Mayans said.

Butta: I think that Beyoncé will be a lock, though. And I'm not mad about it. I'm sure she'll be in the midst of a promotion cycle for her next album by then, so it'll be a win-win.

AudioDiva: Okay, if I had it my way Ledisi, Chaka, Esperanza Spalding, Adele, Kelly Price, CeCe, maybe even Jill Scott and Toni would be gracing the stage. I could even go with JHud because she did decent at the GRAMMYs. I'm with Lady J, why throw Monica off? I'm not too keen on Brandy and I know some of y'all would drink her tears if you could. I know she was Whitney's BFF/biggest fan and Ray-J the Pillow Snake was dating Whit...but naw stop making fetch happen with Brandy.

Now IF they got their vocal shit together, Christina A, Mariah Carey and Alicia Keys (LMAO! at "I Can't Quite Find The Right Key") would be of relevance, let's not act like they don't come through no matter what is wrong with them vocally right now. I'm critical of my girl Mariah, but she didn't sound half bad at some of her last show appearances. And I don't know if some of y'all like Kelly Clarkson, Sara Bareilles and P!nk but I do, and I think they could do something interesting and cover the blue-eyed soul deal and it would cancel out someone like Celine Dion. I would even like to see Annie Lennox up there just to shake up the score.

And if we're talking newbies, Emeli Sande for sure. Her album may be a bore chore but she's got chops. Oh, and I guess since everyone is in love with Amber Riley then go on and throw her up there -- just don't bring the rest of the Glee kids up there because then we've got a Kidz Bop concert.

Butta
: Yes, how could we leave out Esperanza and my BFF in my head, Jilly from Philly? I think that Jill could do something exciting with "Saving All My Love For You."

Lady J: If anyone could take a Whitney song and TOTALLY flip it, Jill could.

AudioDiva: And I also forgot about Meshell Ndegeocello. That's going in a more sophisticated realm, though.

Remi: I actually considered Jilly, Meshell and Erykah Badu, but decided against them all.

Also, I think P!nk is a vocal juggernaut who would do great, but I just don't see her as one of those who should be performing in a Nippy tribute. Like Badu, I just don't think it fits. Might as well call Björk while we're pulling in all great voices.

And no, Brandy stays, dammit!!

Regarding Mariah, she really does turn out some great vocals still, but her problem is her nerves, and honestly she's too damn old in this game to still be nervous whenever she isn't performing for people who bought tickets specifically to see her.

For me, it's not about doing a rehash of Nippy's sound, but to convincingly convey both a sense of loss and a gratitude for her contributions. I just don't see that from some folks mentioned. Jill a little more than Erykah, but really not Meshell.

SoulUK
: You know what, even if one or two of the ladies we wanna see get the nod, the chances are this will be a not-so-hot mess.

Butta
: Well, we had high hopes for last year's VH1 Divas Celebrates Soul and we see how that turned out.

AudioDiva: It's all fine and dandy that we are talking about these great singers, but what I want out of this tribute is to not have everybody act like Whitney Houston did a Ghost and is using their bodies as an instrument for the night. I want these singers, even if they are good or semi-good, to do the songs THEIR way, to sing it like they would do it. Take risks, change the keys, change the vibe of the song, do what makes a good cover a good one and that is keeping the spirit of the original, but shaking up the pattern and making something memorable. I could care less if someone like JHud who is a good singer in her own right to gives us a typical vanilla run through of "Saving All My Love For You." That's not a tribute, that is copy-catting and I'm not watching a Whitney tribute to fill Whitney's void, I'm watching to see if these singers can keep me entertained by not giving me Whitney, but giving themselves.

Butta: Can we get a hologram of 1998 Lauryn Hill to do a reggae-flavored version of "My Love Is Your Love"?

Butta: Scraping the bottom of the pot are we, Remi?

D-Money: ...or Bobby. Or anyone with the last name Brown, for that matter.