What Should We Make Of The Reformed Attitude Concerning ‘The Bodyguard’? 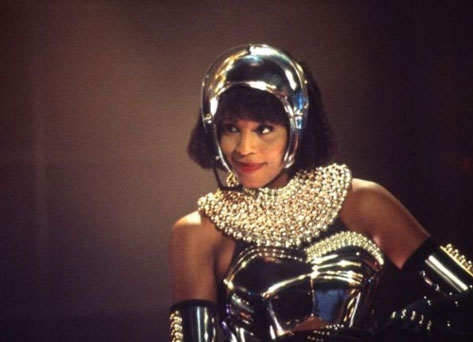 I am a Whitney Houston fan. I am a musical theatre geek. I used to slay the recess hours in youth with my warbling rendition of "I Have Nothing." I am mad that Party City has not yet made a Rachel Marron "Queen of the Night" costume with a removable microphone headpiece. So upon hearing that there is indeed a musical based on Houston's 1992 debut flick hitting London's West End this fall, I should be flinging jazz hands and clutching The Bodyguard DVD to my heart. Yet, I let out a laugh. Not a euphoric one, but an "Oh really?" chortle, as it's a little funny to me that after a reformed attitude has befallen on a film that has often wallowed in "one-star" moviedom.
Center

Let's not have selective amnesia. I can't be the only one who was clowned on for taking up for and loving this movie for years? I can't be the only one who remembers that even though it became the second highest-grossing movie of 1992 with a killer soundtrack, it was still slammed by critics? That it scooped up six Razzie nominations, including one for Worst Film? That it was rarely shown on TV because folks always get itchy whenever we put interracial love stories on-screen, especially when it concerned two huge stars like Houston and Kevin Costner? The Bodyguard is entertaining romantic cheese whiz swirled on a Cheez-It and it got no love for 20 years. Now it's getting hugged. It's now been upped a couple of stars (** ½ last time I checked), once on cable it was paired with An Officer and a Gentleman and touted as a "classic love saga" and now its getting the flashy musical -- excuse me -- romantic thriller musical treatment starring the great Heather Headley in the titillating role of Rachel Marron.

See, all of this would have never happened if Whitney was still alive. Trust.

This is what happens when famous people pass on -- all the things we trashed are now treasured, and boy, do we go overboard with it (cause let's face it, "classic love saga" is a bit reaching in this case). I'm always amused at the attitudes people take when celebrity deaths occur and how we begin to look at things differently about that person and/or the work they did. How when we're given some time and take into consideration the current crap-o-la climate of cinema today, we realize that panned movies like The Bodyguard can get a second life and weren't so terrible to begin with. So Glitter, The Fantasia Barrino Story, Get Rich or Die Tryin', Under the Cherry Moon -- hold on, there is hope for you all, too.


TAGS:  heather headley", Kevin Costner, the bodyguard, whitney houston
Previous: Get ‘Down’ With Jess Harlen Next: Big K.R.I.T. Says ‘I Got This’ & We Believe Him