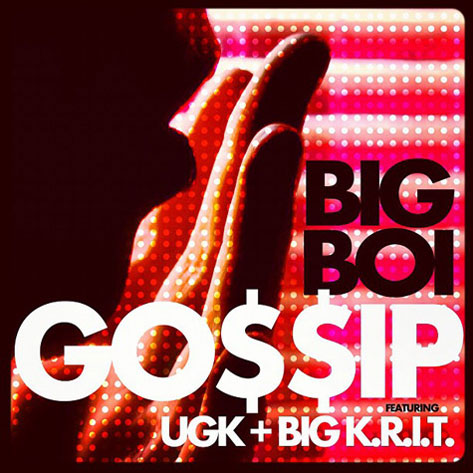 There are several activities that most of us regretfully engage in. Talking on ones cell phone while driving, drinking way more coffee than any person probably should and singing along to R. Kelly's "When a Woman's Fed Up" when no one is watching to name a few. And unfortunately for most of us, it's also hard to pass up an opportunity to share who was kissing who behind the ice cream parlor when an opportunity to do so presents itself. Well, hip-hop veterans Big Boi and UGK have united with the newest third coast hero, Big K.R.I.T., to urge us to stop with all the chatter. "Gossip," the second single from Big Boi's forthcoming album, Vicious Lies and Dangerous Rumors, has the four emcees going in over some southern fried production. I'd have to say that what the production lacks in originality is more than compensated by the clever wordplay displayed on the track. Big Boi exhibits the casual charm and sense of humor that we have grown accustomed to as he clowns on the ever-growing trend of "smedium" clothing. Having worked retail for a good chunk of my adult life, I can tell you that not everyone is a medium, but everyone seems to be purchasing mediums. Be sure to check the track below, bounce as much as your skinny jeans allow, and look out for Daddy Fat Sacks' sophomore album hitting stores on November 13th.