SoundTable Discussion: What VH1’s 40 Greatest R&B Songs Of The ’90s Got Wrong 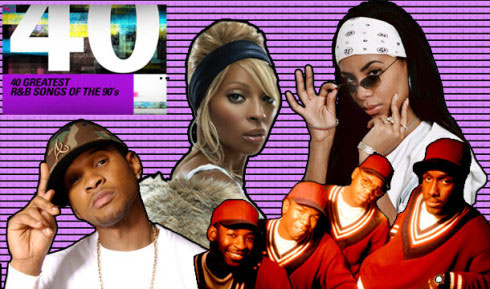 Last night BET, Jr. VH1 premiered their latest Greatest countdown special, this time around setting their sights on the 40 Greatest R&B Songs of the '90s. As connoisseurs of '90's soul and R&B, there was no way we were gonna miss it and once it started the flat screens at SBHQ were tuned in and turned up. If you follow us on Twitter, then you got to see Butta's real-time reactions as one by one the top 40 songs were revealed and audible gasps, cries and exclamations of WTF and GTFOH were heard across the land. Needless to say, this list was by no means definitive nor accurate. Instead, it's led us to scratch our heads and want to scratch out the eyes of whoever compiled this list. Some of the '90's R&B songs on VH1's top 40 were on point, but many were not -- including way-off rankings, nonsensical inclusions and glaring omissions. Trying to boil down a decade's worth of music in a genre into 40 songs is no short order, but if you're gonna do it, then do it right or don't do it at all. But since VH1 decided to go there, you know that we here at SoulBounce had a lot to say about it.
Center

Butta: So what did everyone think of VH1's 40 Greatest R&B Songs of the '90s nonsense countdown?

D-Money: Wait, why is "Do Me Right" by Guy even on this list? It's a minor Guy hit at best. I had to look up the video on YouTube to remember what it sounded like.

DaTruth: I remember the song. It was just eh.

The majority of the list made me ill and angry. But the cherry on the HAM was Ashanti offering commentary.

Butta: The vast majority of this list was such an effing joke. I couldn't take it seriously after the bottom 10 was revealed with two top 10 songs.

Where was Next's "Too Close"? Adina Howard's "Freak Like Me"? Tevin Campbell? Toni Braxton? Room 112 where the playa's dwell?

SoulUK: I kinda secretly hoped Total would make the list.

Butta: How was "Creep" not on that countdown but Keith Sweat's "Twisted" was? What drunkard came up with this list. I mean seriously.

Oh, and I know we need to be honoring Nippy from now till the next icon dies, or we get tired (whichever comes first, I really hope it's the latter), but "I Will Always Love You" was not an R&B song. Yes, Nippy's voice brought soul to a country song, but really that was a pop standard if there ever was one.

I would almost argue the same about the MC & BIIM collab, but it was definitely more R&B than "Always Love You," and that live performance they did on her tour in '06ish wins me over every time.

"Where My Girls At" but no "Creep"? SERIOUSLY?

I mean, folks who were actual R&B heads in the '90s would rank "Creep" over "No Scrubs" as the definitive TLC entry for the decade any day. That's the difference between an R&B ranking by pop fans and an R&B ranking by R&B fans.

DaTruth: And how in the world did they do a list that didn't include "Candy Rain," Brownstone OR TOTAL!?!??!

They are fake as Kim K.'s church dinner for her "baby."

AudioDiva: I also was pissed about not seeing Brownstone ("Grapevyne" is my JAM!) and little love for Diana King's "Shy Guy" and "Candy Rain." And also NO Toni Braxton? NO Zhane's "Hey Mr. DJ"?!?

I also concur about Whitney Houston and also "One Sweet Day." Those are pop ballads, sorry but they are. If anything for Nippy in the R&B lane it should be "It's Not Right But It's Okay."

D-Money: Don't get me started on "One Sweet Day." I hate that song, have always hated that song and will go to my grave hating that song. It's the sappiest thing ever written.

AudioDiva: Yeah, D-Money, out of all of Mariah's R&B songs that were hits in the '90s, THAT one is #2? Bullsh-t. So what exactly is "Honey" supposed to be? Polka?

My thing is that soul music as a whole branches off into so many genres that the lines are blurred when it comes to a lot of these songs. So call me picky -- *puts on monocle* -- but I don't really consider "Poison," "Rub You The Right Way," "Feels Good" and "MotownPhilly" R&B per say, it's New Jack Swing, and they are not in the same category as say "No Diggity" or an R. Kelly song. If you're going to exclude anything Maxwell, Erykah Badu and D'Angelo from this list and be picky and categorize them with the "neo-soul" tag (which is what I know they did as that's the only reason why they're not on this list), then anything between years 1990-1992 were still very New Jack. I don't really consider '90's R&B getting its foothold till about 1993, but that's just me.

Also I'm puzzled about the year with Lisa Stansfield. Nice they put it on the list as it is a great song, but I swore that song was released in 1989 as well as the album it came off of -- so in my book it doesn't count.

D-Money: On that Lisa Stansfield, I was thinking the same thing. And in that case, Rhythm Nation dropped in 1989 (and several singles were released in 1990 and 1991). You mean to tell me none of those made the list? Bull and sh-t.

AudioDiva: Checked the date on the Lisa Stansfield. It was released as a single in October of 1989... :-/

I mean if they wanted to add some vanilla into the R&B pot, there was Jon B with "They Don't Know," Jordan Knight with "Give It To You" and I know Madonna's Bedtime Stories was a big R&B affair with hits, and even All Saints "Never Ever" was played on the R&B stations when I was growing up.

D-Money: Just thinking about that obscure ass Guy song making the list is pissing me off. I'd rather they have put "Splackavellie" on than that sh-t. Ugh.

Remi: Hahahaha! That video was some BET Blackbuster Movie-grade shite.

AudioDiva: Ditto to the Guy track. Ugghh. They just threw that on there.

Butta: And don't get me started on Bone Thugs-N-Harmony making their list.

AudioDiva: Out of curiosity, what does everyone here consider their #1 R&B song. I know it's difficult to come to one conclusion, but for me it's either Aaliyah's "One In A Million" or TLC's "Waterfalls."

D-Money: I can't tell you for sure what #1 would be, but it definitely should not have been "Poison." While it still goes today, it's wasn't on par culturally or even charts-wise with stuff being put out at the time by Michael, Whitney, Janet...hell, even Johnny or Bobby.

DaTruth: I concur. Everything in my world feels sunshiny, sexy and sweet when that song is on.