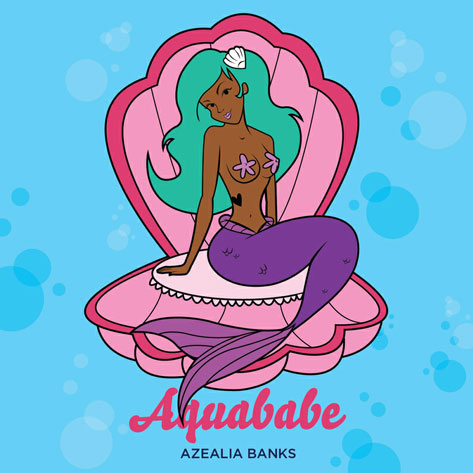 Newcomer Azealia Banks has been making some serious noise on the hip-hop scene as of late. The only problem is that a good amount of that noise has little to nothing to do with her musical abilities. Beefing with contemporaries and veterans in the game must be the cornerstone of her marketing scheme because up until recently releasing music didn't really seem to be on the immediate agenda. In a newly sparked effort to prepare the public for her forthcoming project, the Fantasea mixtape, Banks took to her Tumblr page to release her new track, "Aquababe." The Machinedrum-produced cut has the Harlemite competing with random sound effects for the listener's attention. Her choppy wordplay indicates that she may be quite found of herself. I can't say that I share her sentiments. After a few listens I've
arrived at what I've found to be the worst place you can end up -- indifference. I can't say that I like this, but I don't hate it. What I will say is that there is just too much other content out there to justify any more spins. I do however enjoy the cover art, but that may just stem from my affinity for old Hanna Barbera cartoons. Check out Azealia's 1991 EP on iTunes now and look out for her Fantasea mixtape dropping on July 4th.


TAGS:  audio, Azealia Banks, Machinedrum
Previous: Morning Soul: If You Need Me, Baby, I’ll Come Running Only To You Next: Oddisee & Olivier DaySoul Have A Message For ‘You’