Balance And The Traveling Sounds Certainly Haven’t ‘Lost’ It 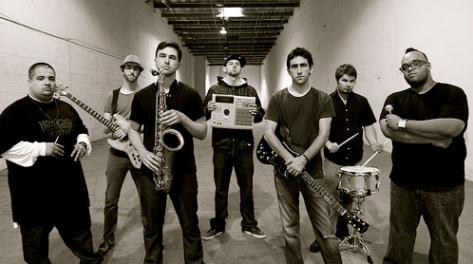 Cast your minds back 10 months or so and regular readers may remember that we introduced you to the Bounce-Worthy collective Balance and the Traveling Sounds, a seven-piece soul/hip-hop/jazz band out of California. With 2009's Travel Guide Vol. 1 and last year's Departure EP already under their belts, BTS have teamed up with Orisue Clothing to release their second EP, Lost Luggage, a prelude to their upcoming second full-length effort, Travel Guide Vol. 2. Similar to Departure, which featured a cover of Dilla's "Won't Do," Lost Luggage is a mix of original material and covers, all done in BTS' distinctive "live" hip-hop style. Their mash-up of Wu-Tang Clan's "CREAM" and Blackstreet's "No Diggity" is a perfect summer jam featuring some killer sax work and the first single, "Jump To It" (which features a sample of the Aretha Franklin classic), are guaranteed to raise temperatures, wherever you may be. The six-track EP is available via the BTS Bandcamp page as a "name your price" download and the video for "Jump To It" can be peeped after the bounce. If you are in need of a summer soundtrack you may have just found it.