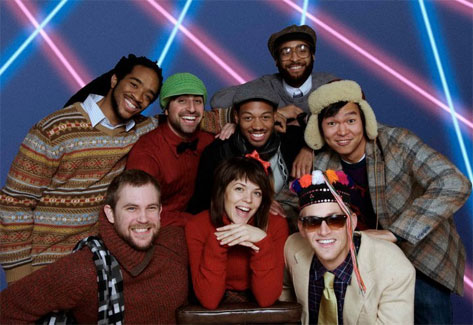 When we think of Chi-Town based hip hop, immediately the faces and rhymes of Common, Lupe Fiasco, Twista, Kid Sister and Mr. Kim Kardashian Kanye West come into focus. Yet the Windy City's tradition for churning out some of hip hop's most innovative continues to pulse as a whole new crop of kids on the block are moving in. Meet new neighbors Sidewalk Chalk, a multi-cultural octet who are anything but quiet as they bring the flows, the croons and the big brass to an electrifying high. Taking an eclectic approach to their sound, Sidewalk Chalk dispel all the neat little boxes that individuals like to place musicians in as their sound is a fruit salad of hip-hop, jazz, soul and a splash of funk -- so you can automatically conclude that there is a little something for everyone who decides to dig in.
Center

Amateurs they are not as the band are a currently a hot live act that has graced the stage with the likes of SB faves such as De La Soul, J*DaVeY, Jazzanova and Questlove from The Roots.They also haven't wasted precious time as they released this year their wildly fun debut album, Corner Store, which was co-produced by Greg Magers, of Lupe Fiasco's The Cool fame. After hearing cuts like "Water Song" and the funky strut of "Plastic," I'm completely sold that this crew is bringing the heat, and that this is just the beginning for them. So extend the Tupperware and the pot roast, and welcome Sidewalk Chalk to the neighborhood!