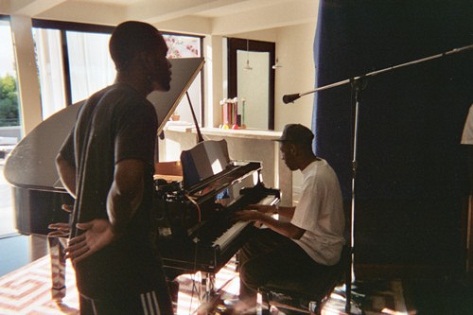 By now, I'm sure that a lot of you are grooving to Frank Ocean's Channel Orange. The album, which was released digitally a week early on Tuesday, has been on constant rotation here at SBHQ (even making a few new Frankie O. converts in its wake). And, while reportedly making a digital splash that's expected to earn him a spot atop the charts next week, we still have the album's physical release to look forward to. What incentive would someone have to purchase the physical copy over picking it up from iTunes? Well, aside from the accompanying booklet, it's the bonus track that appears at the end of, well, "End." It's titled "Golden Girl" and features Frank's Odd Future partner-in-crime Tyler, the Creator. It's an island-flavored groove that, like "Sweet Life" before it, is more than a little influenced by Stevie Wonder. That being said, the flip at the end that heralds Tyler's verse is gonna either going to impress some or turn others off. Either way, the relaxing groove of the song can't be denied. Get into it below and be sure to check out Channel Orange (as if you haven't already).