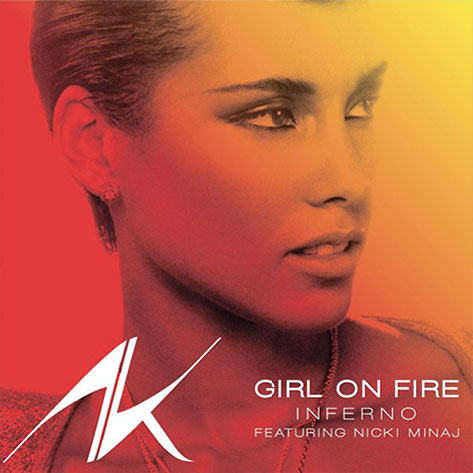 Alicia Keys may be rocking a fly new haircut, but after listening to her new single, "Girl On Fire (Inferno)" featuring Nicki Minaj, it sounds like she's stuck in her same old sound. And it's not that that's necessarily a bad thing (just ask Anita Baker and Sade), but there's no "wow" factor here for this to be the first single from her upcoming fifth album, also named Girl On Fire. Sadly this is more lukewarm at best than anything remotely hot. Even Young Money Barbie's presence and the loud drums don't elevate this above something more than bland album filler. And this is one version of three that Alicia is releasing of this song, so prepare to be bored some more. Perhaps a music video with lots of pyrotechnics (because with a title like "Girl On Fire" how can there not be any fire?) will help this out. That remains to be seen, but we will get to see her perform it live on the 2012 MTV Video Music Awards airing this Thursday, September 6th.
Center


TAGS:  alicia keys, audio, Nicki Minaj
Previous: Azealia Banks Takes Us Back To ‘1991’ Next: Are You ‘OK’ With Big Boi’s New Video?