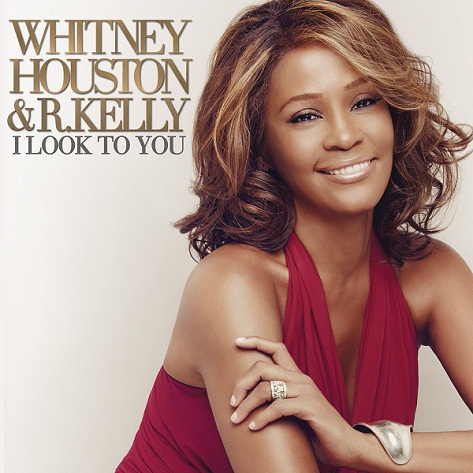 Full disclosure, folks. While the surprising loss of Whitney Houston is still fresh, there are a few moments of her discography that I'd rather forget. Unfortunately, that includes her final album, I Look to You. Though it had it moments, like "Million Dollar Bill," it was bogged down by the loss of her stellar voice and schlocky, overwrought ballads. The R. Kelly-penned title track, while touching lyrically, was just...well...boring. During her memorial service, R&B's pied piper sang "I Look to You," adding a bit more depth to it than Whitney's recording. So much so, it seems, that the song has been revamped for Whitney's upcoming greatest hits set, I Will Always Love You - The Best of Whitney Houston, pairing previously unheard vocals by Whitney with Kelly's for a posthumous duet. This new version of "I Look to You" does improve a bit on the original. Still, the song remains overwrought and schlocky, seemingly made to be sang over movie credits and by hopefuls on reality singing competitions. I'm sure that fans of Whitney hoping to hear her voice once again will be happy for the collaboration. However, I still find it a bit...well..boring. But you're free to form your own opinions, and you can do so by checking the song out after the bounce.