The Layabouts & Imaani Sound ‘Too’ Good Together 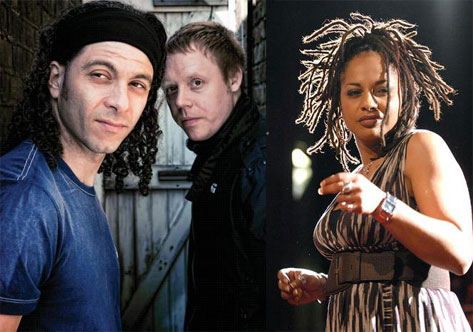 The Papa Records/Reel People Music camp is personally one of my favorite labels. They've yet to release a bad project, and their winning streak sounds as if it will continue with the October 8th scheduled release of The Layabouts' debut album, Future Retro. The dons of deep and soulful house, as Leigh Darlow and Alex Paschali have been described, have some serious dance floor grooves on the way on Future Retro featuring the vocal talents of Omar, Terri Walker, Imaani and Tony Momrelle, to name to a few. The latter two have worked together before as part of both Incognito and Reel People, and they recently joined The Layabouts to record an acoustic session of some songs from Future Retro. The Layabouts have been kind enough to give us a sample of that session with the freelease of the track "Too Late (
Acoustic Mix)," available for the affordable price of an email address. This performance highlights the texture of Imaani's voice and the addition of Momrelle's honey-coated vocals are the icing on the soul cake. Get yourself a slice.
Center


TAGS:  Alex Paschali", audio, imaani, incognito, Leigh Darlow, omar, reel people, terri walker, the layabouts, tony momrelle
Previous: Morning Soul: I Decided That You Are The Him For Me Next: Soulpersona & Princess Freesia Do ‘It Again’