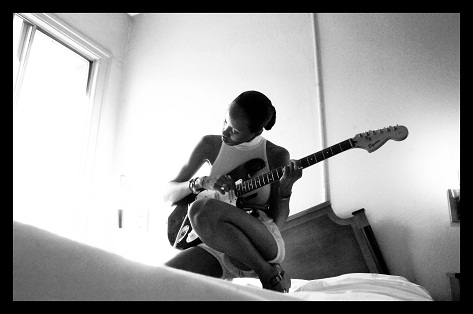 This week marks the release of Jack Davey's L0-F! Side A. The first stage of Miss Jack's solo outing, L0-F! finds her switching gears from the electro-R&B sound she's become known for with J*DaVeY. Instead, Jack goes full on rock & roll on the five-track set. The entire collection was recorded in Jack's walk-in closet during the scant few breaks from her newborn son, and the unique distortion that recording environment created adds to the set's distinct mood. If you liked the rebel yell of "Howl at the Moon," then you'll love the sound of the EP, with songs like "Tinted Windows" and "Ride On," both of which are full of growling guitar and bad-ass attitude. As mentioned, this is only the first wave of bad-assery from Jack. L0-F! Side B will drop November 6th and a deluxe edition combining both sides will rock your speakers on December 11th with three additional tracks in tow. Rock out (with your you-know-what out) to the stream of L0-F! Side A after the bounce and then head over to Amazon or iTunes to get your very own copy.
Center