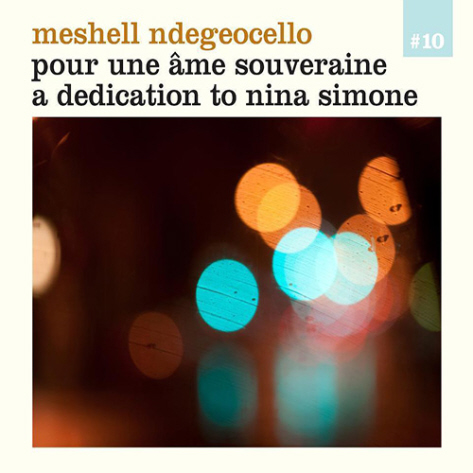 Meshell Ndegeocello has always been the chameleon. Slipping into whatever guise she sees fit and not paying a mind to those who consistently want to thrust her in a box and wrap it all up in a gaudy bow. With 10 albums in her arsenal, a spectrum of genres explored and redefined, breaking out of the four-cornered norm has just been an Ndegeocello thing, and has been for some 20 years now. So when it was announced that Ndegocello was to pay tribute to the High Priestess of Soul, the legendary Nina Simone, on her tenth release, all I did was nod my head, smiled to one side, and think, "Yep, that sounds just about right."
Center

Sure, there are variant personalities and distances of time between the two, but Ndegeocello and Simone are pretty much kindred spirits when it comes to their social standing and the music that they mold and shape for the masses. Hence why Pour une âme souveraine: A Dedication to Nina Simone, is a project that feels like two incongruent puzzle pieces fitting together to help aid the bigger, clearer picture.

The title Ndegeocello pegged for this dedication couldn't be riper for the proclamation. Translated to read "For a sovereign soul," Ndegeocello has embodied the fabric of Simone's being and message in just a mere line. Simone was the independent and feminist (or "womanist" for all you Alice Walker-ites) woman before the term was ever coined, before women in knee-high boots, gold lame and coned bras bopped around proclaiming it so.

During her tenure, not only did Nina Simone personally break out of four-cornered expectancy, but her music also was liberated in its stances. Simone never wanted to be dubbed as just a "soul" artist as she often believed that genre labels belittled and boxed-in her material, especially since her material was so expansive. Throughout her over 35-year spanning career, which ended with her passing in 2003, Simone played the eclectic. Her foundations were classical, jazz and blues, but she built her house with the utmost variance, as every song embodied a new emotion, a new technique frothing to the surface.

With an organic flow, Ndegeocello upholds all of Simone's influence with high regard on Pour une âme souveraine, as she blends in the inquiry, energy and intellect that Simone exuded in her material. Usually when we look at tribute records we're searching for likeness to the original source. The best examples have often been where risks are taken, but said source isn't completely left out of the loop. For Pour une âme souveraine Ndegeocello handles Simone's catalog with care, making sure this end is up, that nothing is broken when you shake it, that none of the essence is scrubbed out for cheap modern tactics. With this attention and precision, Pour runs beautifully. Ndegeocello had a lot of material to comb through as the vastness in Simone's catalog is unprecedented, but she opts to take the challenge of latching onto Simone's most well-known and most beloved songs for a more focused scope.

Ndegeocello doesn't relish in the essence of Simone just for herself. She enlists a small, but effective list of guest vocalists to give the album various dimensions, making this a real project of love and fellowship. Valerie June, a rising folk vocalist in her own right, coils her tangy twang around the quiet thump of "Be My Husband" while Lizz Wright enchants on "Nobody's Fault But Mine." On the classic anthem "To Be Young Gifted & Black" Cody ChestnuTT, the lone male solider voice here, gives a riveting reading with soft flutes and guitar strums fluttering in the background. Then there is Sinead O'Connor who makes the quiet fire of "Don't Take All Night" a special occasion. Personal favorite here is the vigorous reading of "The House of the Rising Sun" with Toshi Reagon who ignites with her faultless vocals, and its electric frantic pace takes this classic to new heights.

When Ndegeocello is the soul searching sovereign on her lonesome, she doesn't flake out. You feel the sensual heat on "Feeling Good," the yearning on "Please Don't Let Me Be Misunderstood" and the urgency on "Suzanne." Yet, when Ndegeocello derives from Simone's blueprint is when her reinterpretations get a bit more cerebral. Her alto tones march in time with the methodical bass smears on "See-Line Woman," marking it as the cover song Sade missed an opportunity to do. Simone's tour de force (and my all-time favorite song of hers) "Four Women" is exactly the excellence that you want it to be when Ndegeocello takes the reigns as she rattles in an insulated emotive mood. It's just as chilling, inhibited and clever as it vibrates with the familiar disgruntled cry of women of color who have been stereotyped when their rainbow wasn't enough.

Yet, Ndegeocello holds back for "Four Women"'s infamous finale, and the dead quiet at the record's end speaks decibels, almost as if to whisper "thank you, Nina." This "thank you" lingers to complete understanding. Though not explicitly stated, throughout Pour une âme souveraine Meshell Ndegeocello plays the daughter to Simone's mother, and she holds her elder, her progenitor responsible for the crafting and molding of her as the independent, unwavering soul that she is. Just listen closely and you too can hear the gratitude, and feel similarly to also thank both Nina Simone and Meshell Ndegeocello for allowing us to see that we don't have to settle for ourselves to be thrust into a box, and for understanding that we are all just sovereign souls looking to be understood, and that one day we will be.