Esthero Cashes In Her Return With ‘Everything Is Expensive’ 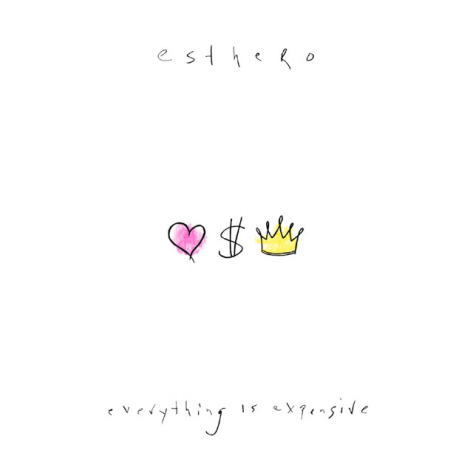 So momma is right. That old virtue called patience has finally paid off.

See you just don't know how impatient I have been for a new Esthero album. Try seven years of toe tapping, long sighs and flipping through magazines in the waiting room. I might have annoyed a few people in the process of this arduous interval. So apologies I issue as all that fussiness is out of my system as the return of 'Ro is now not just a wish but a reality. The Canadian chanteuse comes back in the form of Everything Is Expensive, an album that took three years to craft, a few weeks to record and several years for Esthero fans to anticipate for. Like most, the feeling for Everything Is Expensive felt like peeling open a Wonka bar to get to that glinting Golden Ticket, and with eagerness I unwrapped and prepared for whatever Esthero-y goodness was to be thrown my way.
Center

Leaving us at a cliffhanger with 2005's Wikked Lil' Grrls, Esthero wasn't exactly slacking in that seven year span of absence. She collaborated with the variant likes of Nelly Furtado, K'Naan, Spree Wilson, Mos Def, Timbaland and even took time to co-write on Kanye West's 2008 experimental set, 808's and Heartbreak. Even some of the material present on Everything Is Expensive is a cumulative of material Esthero wrote and tried to shop to other artists over that time. So you can't accuse of her of simply loafing around.

In this time away from her person, Esthero has matured, and the material on this third hour is insulated in introversion. Personal portraits are painted and a much less sprawling genre-bending album is on hand as it stays in its lane, keeping things pretty docile, which leads me to where my disappointment with the album comes in.

Now I know the drill with comeback albums like this. The trip-hop elegance of her 1997 debut, Breath from Another, wasn't to occur, and yes, the zany manic pixie dream girl vibe on Wikked Lil' Grrls wasn't going to be regurgitated. I was prepared for the changes, but I wasn't prepared for an album that suffers from a terrible case of Rip Van Winkle-its.

Everything Is Expensive sounds like an album that was made about 10 to 12 years ago, took a slumber, woke up, stretched and found out that time sure does fly. Since Wikked Lil' Grrls, genres have mutated, sounds have been reinvented and newer voices have become the new poster children of quirk musicality, and Esthero isn't caught up to that, or ahead of the finish line as she's always been. She's quite stuck in the mucky middle of meandering and dull ideas, all the fire and spunk completely absent. The call for music refashion that Esthero fist-pumped the air so fiercely about seven years ago barely has happened and it's oddly, and disappointingly, not happening with Everything Is Expensive.

Like mentioned, Esthero had written a bulk of the material here for other artists, and that thought has the singer sounding unlike herself. Faith Hill was to receive "Go" and it does feel niched in an acoustic country vase. Esthero also designed "Black Mermaid" for Cree Summer and obvious it is. Squint and you might wonder if "Supernatural" was made for P!nk while Sara Bareilles was in mind for "Francis" in all of its power pop piano personification. Even Gwen Stefani is test-driven on Expensive's debut single, "Never Gonna Let You Go."

Still, nostalgia works to Expensive's favor in some areas, as it isn't bogged down in too many theatrical production displays making this an "un-showy" sort of set. It sticks to live instrumentation and minimalistic sound backdrops for a crisper and cleaner sound. With Esthero not latching onto what the cool kids are doing and opting for a more girl-writes-in-journal-meets-guitar fare it enables her to explore her music on a deeper lyrical level -- something she has always excelled at.

She sharpens her tongue for spirited rockabilly fits like "Walking on Eggshells" and cynical jabs like "You Don't Get a Song." Then 180's herself in tug-of-war emotives like the blistering quiet of "Over." A tender hand she puts on "Gracefully," and even though it employs children's voices as backup, she avoids a Mother Goose moment by sheer sincerity. She is also ever so fantastic on the aforementioned "Black Mermaid" and though written for another, it does indeed fit her like a glass slipper (sorry Cree Summer) and marks as one of the best ballads she has penned. I have to say the major highlight for me here is the title track, as it's Esthero at her activist best. Through a thicket of dreamy piano psychedelica, Esthero pretty much nails down the 21st century plight of economic and social disorder, and she makes it a particular note to claim that the kids caught in the middle of this aren't alright. With such a powerful message and Esthero's ability to provoke that imagery, I somehow wish that she had circled a full album around this exact theme.

Everything Is Expensive isn't as flamboyant nor does it break any new ground as past albums achieved so well, and it is disappointing in some ways. Still, as I pocket so fewer musical gems than I would care from this album, I look at the little things as for the most part I applaud Esthero for once again bravely stepping forward to tell us her stories all while breaking a silence that had been stable for far too long.

Esthero Everything Is Expensive [Amazon][iTunes]