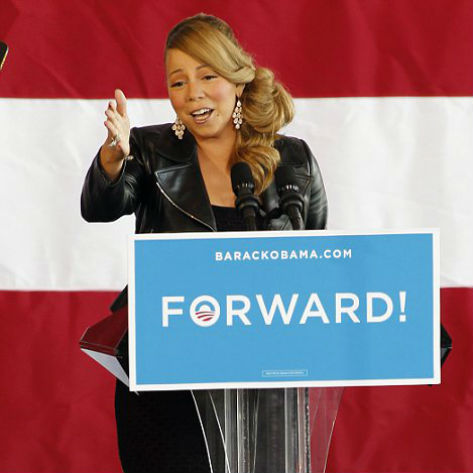 Mariah Carey and husband Nick Cannon have been two of President Barack Obama's biggest celebrity supporters during this campaign season. Mariah attended a rally before election day in North Carolina with First Lady Michelle Obama, Nick was blowing up my Twitter feed and the couple was spotted attending numerous high-powered, celebrity fundraisers for the POTUS. Mariah has now sealed the deal on her multi-faceted support by releasing a song to the public entitled, "Bring It On Home." The track is a call to individuals to "not give up the fight" and reassures weary people that "we gonna win," presumably by re-electing President Obama, which is exactly what happened last night.
Center

My favorite version Mariah is what I call "church Mariah." This is the Mariah who balanced Splenda-sweet pop fare with serious tracks, like "Anytime You Need A Friend" and "Make It Happen," that openly referenced her faith and relied on gospel-influenced choir arrangements. This Mariah proved that gospel and inspirational works were a primary influence in her work. The last I have seen of that Mariah was on the Holy Ghost-inducing classic "Fly Like A Bird."

"Bring It On Home," an inspirational mid-tempo joint produced by frequent collaborator Jermaine Dupri, doesn't live up to those benchmarks, but its effort to enthuse and uplift in this day and age of political apathy should be lauded. I sincerely appreciate that in all of her work she tries to deliver at least one nugget of inspiration, but I just wasn't moved by this particular track. The lyrics' intentions were very vague as if there was something to read in between the lines. Maybe she thought it was better to create a song that could be applicable in many situations instead of just coming out and saying "Vote Obama"? "Bring It On Home" isn't Mariah's most organic inspirational effort, but for those of us who understand and appreciate its message, it is pretty timely even if it's forgotten tomorrow.