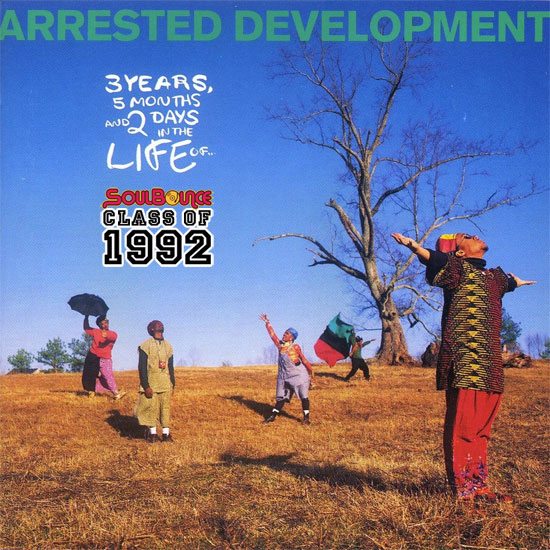 Keeping in mind that Atlanta's other groundbreaking hip-hop contribution of the '90s, Outkast, was just forming the same year that Arrested Development's debut, 3 Years, 5 Months & 2 Days In The Life Of..., was released, it wouldn't be far-fetched to crown the collective with the distinction of being ATL's first hip-hop group to gain mainstream attention. Although today, the group's sound would likely be categorized as anything BUT hip-hop or rap, in 1992, if you were young, of color and not singing, it quickly got lumped into the then-burgeoning genre.

Even with hip-hop's seemingly all-inclusive embrace when Arrested Development first burst on the scene, they stood in stark contrast to the much of the other popular rap music of time, gangster rap. In the same year that artists like the Pharcyde and Dr. Dre would release their seminal albums, Bizarre Ride II The Pharcyde and The Chronic, with their heavy drug references and frequently misogynistic lyrics, 3 Years, 5 Months & 2 Days In The Life Of... felt decidedly positive, even when tackling such societal ills as homelessness. And with a fashion sense that was more reminiscent of the Native Tongues clan than N.W.A., the group was out to prove that they were different in more ways than one. And music fans seemed more than ready for what they had in store.

Led by front man and co-founder Speech, the collective also included a DJ (and co-founder Headliner), a singer (Dionne Farris), a poet (Aerle Taree), a dancer (Montsho Eshe), a drummer (Rasa Don) and even its own spiritual elder (Baba Oje). The album's first single, "Tennessee," set the music charts ablaze. Before long, the video was right behind it, garnering airplay on both BET and MTV. Shot in rural Georgia, it was our visual introduction to this crew that somehow straddled the line between new and old. Though we had never seen or heard anything like this before, it somehow felt familiar, much like visiting a distant relative you hadn't seen in a long time.

What drove the feeling of familiarity is uncertain. Perhaps it was the familiar sounds of Prince, Minnie Riperton, The Persuaders or Buddy Guy that showed up throughout the album in the form of samples. One of the most well-known samples used on the album manifested itself in one of the group's most popular songs, "People Everyday." Borrowing from the Sly & The Family Stone's "Everyday People," A.D.'s version bridged the gap between old and young, white and black, streetwise and educated. The approach worked, making "People Everyday" their first international hit, peaking at the #8 spot on Billboard's Hot 100 chart and #2 on the UK Singles Chart. Everybody was open and ready for more.

With the release of the album's third single, "Mr. Wendal," the accolades kept pouring in. They were tapped by director Spike Lee to record a song for his 1992 biopic, Malcolm X. "Revolution" appeared on both the soundtrack and at the end of the film. Billboard had named both "People Everyday" and "Tennessee" to their Hot 100 end-of-year chart and the album was deemed one of the top 200 Albums of the Year. By the next year, their place at the top seemed secure, thanks to two GRAMMY wins in both the Best Rap Performance by a Duo or Group and the highly-coveted Best New Artist categories.

Little did we know that behind their cheery and familial image, lay a group on the verge of implosion. When TV One aired an episode of its popular biographical show Unsung revolving around the group, many were shocked to learn that, like so many other groups before them, ego and money was quickly driving a wedge between Speech and the rest of the group's members. By the time their follow-up studio album, Zingalamaduni, saw the light of day in 1994, the end was already near. In what seemed to have been a standoff of epic proportions according to Unsung, Farris parted ways with the group following a chair-throwing incident just prior to a live show. Before long, even long-time friendships weren't safe, as Speech and Headliner went their separate ways. Less than five years after they began their meteoric ascent to the top thanks to their successful debut, Arrested Development called it a wrap, citing the oft-used "creative differences" excuse as the reason for their breakup.

It wasn't the last we'd hear from them, though. Dionne Farris would go on to find success on her own, while Speech would embark on a successful international career. A reworked version of Arrested Development would reunite with members both new and old in 2000 and have since released seven more albums. However, the group would never climb to the dizzying heights as they did back in 1992 with 3 Years, 5 Months & 2 Days In The Life Of... Despite the album's overwhelming sense of optimism, the group's eventual demise proved that even the most united fronts can be blinded by the bright lights of success when ego becomes involved.