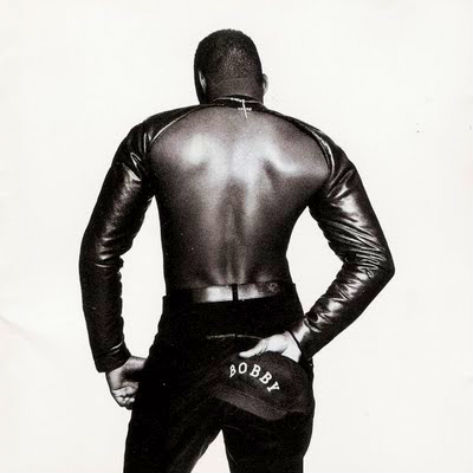 It's impossible to talk about Bobby without mentioning Whitney. That reality applies as much
to the man as it does the album. And it became the self-fulfilling prophecy
that ensured Bobby was the last time
you'd hear Robert Barisford Brown sound like a true star -- confident,
self-assured, not anxious to prove his worth outside the shadow of his wife -- or of his former
self. This isn't to say Brown hadn't battled for independent recognition before
Bobby. After tussling for the New Edition spotlight with Ralph Tresvant,
the group's official lead singer, he defected in 1986 and (after an
underwhelming solo debut), was on a path to global superstardom.
Center

After the initial disappointment of King of The Stage, Brown teamed with New Jack Swing pioneers Teddy
Riley
, LA Reid and Babyface to record the lightning-in-a-bottle album Don't Be Cruel. Between selling eight million copies worldwide, spawning four top-10 singles (including the number
one "My Prerogative"), and earning Brown a GRAMMY, Cruel was nothing but kind to him. As Brown shut down stage after
stage on the album's supporting world tour, he began being hailed by
critics and industry insiders as "the next Michael Jackson."

But those who knew how fiercely competitive Jackson was knew
he had no intention of crowning a successor, and he soon recruited Riley to
help craft his own foray into New Jack Swing on the album Dangerous. But Brown was also working on Bobby, his next album with Riley at that time; and with an MC Hammer project also in the works
for late-1991 release, a sort of urban-pop arms race was brewing. One from
which Brown would soon withdraw, citing his own perfectionism, and not fear of the competition. Also waved away were the reports that Bobby, despite his
image as the most "sex, drugs, and Rock-n-Roll" R&B artist this side of Rick James, had a drug habit. Instead, he was simply working hard at creating the opus that
would officially elevate him to compete at the same level as his idol Michael Jackson.
Plus, he'd met this really sweet girl; you may have heard of her...

So with all these ingredients in the mix, expectations ran
high for an epic that could realistically best 's Dangerous
album, which failed to live up to the astronomical commercial expectations set
by previous releases. While we didn't quite get that, we still got a bunch of songs that perfectly captured the New Jack zeitgeist, even if they didn't redefine it. And I say "we" here because Bobby is where Brown left the periphery of my young mind (where he was simply one of the interchangeable fellas in New Edition, and then the "Every Little Step" guy) to become a dominant, unmistakable personality. I still remember my older sister unwrapping the tape as we prepared to hear the culmination of weeks of "Humpin' Around" MTV rotation, Right-On! magazine reports of arrests for lewd performances and CNN entertainment stories repeating mainstream 's princess-and-the-frog narrative of his new marriage to Whitney.

It was likely that storied troublemaker reputation (especially when used as a contrast to Houston's varnished sheen) that prevented Brown from letting his freak flag truly fly on Bobby. To be sure, the album started out big -- lead single "Humpin' Around" played up Brown's horndog image to LA and Babyface's ominous, theremin-like wah-wah, while the media-bashing "Get Away" brilliantly picked up where "My Prerogative" left off. But despite its moments of brilliant R&Bluster (mostly accompanied by era-appropriate attempts at rapid-fire rapping), the badass Bobby that America came to see -- the Bobby on the album's brilliant cover photo -- was absent from half of the album. With its abundance of just-okay midtempos that sounded ripped from Don't Be Cruel, to hamfisted attempts at social commentary, to a painfully saccharine Debra Winans duet (called "I'm Your Friend" -- 'nuff said), to the reggae-lite "Pretty Little Girl" that only highlighted the superiority of its Shabba Ranks and Maxi Priest-crafted progenitor "Housecall," the impossible seemed to have happened: Bobby Brown had been out-edged and out-New-Jacked by Michael Jackson.

With its abundance of underwhelming tracks (a cardinal sin in the days of Mississippi-count fast-forwarding), I soon tossed the tape back to sis. It was a decent offering, but seemingly glorying in mundanity masked possibly as maturity. In hindsight, one could argue that non-threatening sheen was a sign Brown doth protest too much to the rumors of his drug and alcohol dependency. In fact, his much-anticipated duet with wife Whitney on "Something in Common" ended up more a milquetoast press release on their compatibility than the surefire smash it should have been. Two decades (plus a few revealing interviews and a damning reality show) later, I can only manage a pained smile as I hear Nippy coo, in her best church-lady affect, the words "I believe in old-fashioned rules and old-fashioned ways / courtesy, honesty / like in the old days." I don't doubt that she held those views to some extent (after all, she was known to on numerous occasions insist on being called Mrs. Brown, long after her career had irretrievably eclipsed her husband's), but now I know the press release was really trying to bury a much sadder story of a drug-addled, codependent, mutually destructive love. All of which was about to get much worse, as Whitney was months away from changing history with the release of her film debut, The Bodyguard, and its accompanying soundtrack.

With the relative failure of the Bobby album (though a million-seller, it was by most accounts a commercial disappointment) juxtaposed with the dizzying heights to which Whitney was about to rocket, America was about to crystallize the image of Brown it would hold on to for the next two decades. After a failed group album with his crew of unknowns (the largely forgotten B. Brown Posse album released a year later) showed the shoddy state of Brown's coattails, Brown put his recording career on hold, as he tells it, to raise the couple's infant daughter while Houston enjoyed a three-year period as the biggest recording star in the world. But as far as the public was concerned, he'd simply decided to ride the trains of his wife's signature evening gowns, living off her sequined largesse. More domestic resentment. Failed 1997 album. Rinse. Repeat.

And there, perhaps, is the greatest tragedy of the Bobby album. It's largely forgotten by the pop mainstream, despite its visual and sonic presentation serving as a guide for contemporaries like Jodeci and successors like Usher and Ray-J. "Two Can Play That Game" may not be mentioned on any of the 8,000 VH1 countdown shows, but those who know real R&B will always remember that Bobby had "Good Enough." Bobby was good enough.