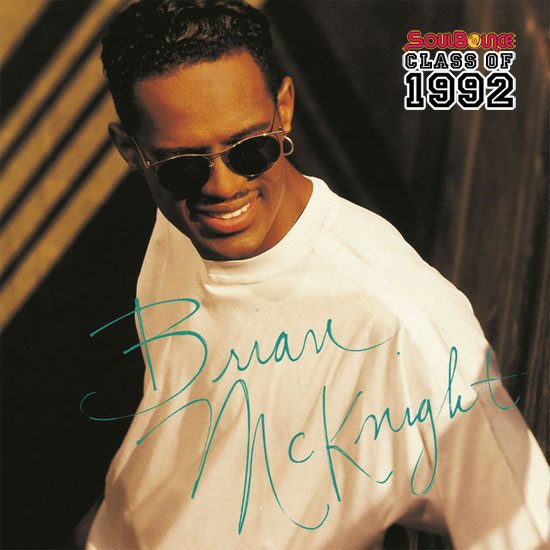 Before Brian McKnight turned into Brian McNasty, he was a squeaky clean crooner who sang the most innocent of love songs and ballads. Think back to 20 years ago when his wholesome self-titled debut album hit the shelves in June 1992. Brian McKnight wore his heart on his sleeve on Brian McKnight and sweetly sang about the intricacies of falling in but mostly out of love. There was no smacking it, flipping it and rubbing it down to be found here unlike on many records by his contemporaries, which made this artist and this album a refreshing addition to the R&B landscape of the time.

With New Jack Swing was its way out and hip-hop soul on its way in, Brian McKnight was one of the most soulful R&B records to be released in '92. Brian's soul came from his upbringing steeped in the church where he honed his vocal skills in the choir and also picked up many of the eight instruments that he plays. It also helped that he comes from a musical family, with his older brother Claude McKnight III a founding member of the gospel group Take 6. But instead of going the gospel music route, which he very well could have, Brian McKnight decided to take his talents to the R&B arena, and the genre has certainly benefited from his contributions, starting with this impressive debut album.

Surprisingly, although Brian McKnight went on to become a platinum seller, the album wasn't as a big a hit with the public at large as it was in my dorm room. It peaked at #58 on the Billboard 200, but it was number one with a bullet as far as I was concerned. This was one of the first CDs that I bought, and I played it so much that I'm sure my roommates either became Brian McKnight lovers or haters by the time the semester was over. Their opinions didn't matter either way because Brian McKnight was singing exactly what I needed to hear at that moment in time. By this time in my life I had experienced like, lust, love and everything in between, was nursing a broken heart and Brian sang my truth on songs like "The Way Love Goes" and the tearjerker that is "One Last Cry." Oh, "One Last Cry." This song still manages to get me choked up whenever I hear it. It's such a sad, almost sappy, song about love lost and the feeling sorry for yourself that ensues. The single really should have been packaged with a travel pack of Kleenex.

When he wasn't making listeners cry their eyes out one last time, McKnight also found the time for romance on songs like "Never Felt This Way" and "Stay The Night." "Never Felt This Way" found Brian expressing how deep his love is with a simple piano accompaniment. "Stay The Night" had Brian getting his smooth mack on and encouraging the object of his affection to spend the night with him with a very convincing argument.

The more uptempo songs on Brian McKnight are largely forgettable. I seriously forgot that the album opener, "Yours," even existed until I blew the dust off my CD to write this piece. "Goodbye My Love" was another track that I made sure to fast forward through when listening to this album back in the day. It's not that "Yours" and "Goodbye My Love" were bad songs, but they were about two years too late to be relevant with their New Jack Swing-y sound. His updated take on Hall & Oates' "I Can't Go For That" couldn't compare or compete with the original, but it was an admirable effort.

McKnight decided to close the album with two inspirational songs that displayed his faith, "Oh Lord" and "My Prayer." Take 6's influence can be heard all over "My Prayer," which featured vocals by Claude who joined his younger brother to close out the record in fine fashion.

Although Brian McKnight wasn't a commercial success and lacked any breakout hits, it was a successful introduction to the talent that is Brian McKnight. Largely written and produced by the man himself, it was a sign of his undeniable skills and the greatness that was to come on subsequent releases.