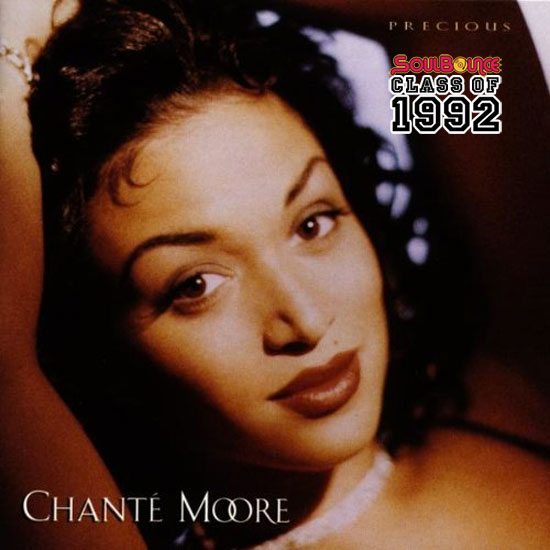 Years before Chanté Moore had a man, she was a brand new artist most known for her guest spot on El DeBarge's "You Know What I Like." Even then, it was evident that then-25-year-old was a talent to watch. And then the lead single from her 1992 debut, Precious, was released and erased any doubt that her star would surely rise. That single, the sultry "Love's Taken Over," would go on to peak at No. 13 on the Billboard R&B Songs chart (where it found a home for 33 weeks). While the single was exemplary of the vibe audiences could expect from Precious, it didn't speak to all that could be found there. The album was an unexpected blend of pop, jazz, R&B and, yes, even a sprinkle of New Jack Swing that showed that a talent like Moore's wasn't one to go unnoticed.

Precious was an album obviously made to cater to the urban adult contemporary crowd. Packed with slow jam after slow jam, the majority of the album's 12 tracks fit right in line with the quiet storm radio of the day. Luckily, Chanté's enchanting voice was made especially for this type of material. Look no further than Precious's second single, "It's Alright," for proof. Full of the usual slow jam staples (finger snaps, wistful piano and unassuming bass), the song allows her soprano to coax and coo her lover into a sense of assuredness. It's a quality shared with other songs, like title track "Precious," "Finding My Way Back to You" and "Listen to My Song."

Things start to really get interesting, however, when Chanté begins to venture outside of the quiet storm norm. The jazzy and forlorn "As If We Never Met" is heartbreaking perfection. Meanwhile, "Candlelight & You," her duet with Keith Washington, is the filled with the kind of stuff to get hearts racing (not to mention how wonderfully their voices meld together). "Who Do I Turn To" is the album's only attempt at something uptempo, and for the most part, it works. However, due to the slower pace of everything surrounding it, it stands out like a sore thumb. But it does act as a great lead-in for the slightly bossa nova stylings of "I Want a Love Like That Again," which swings and sways so very nicely. "Because Your Mine," which features an appearance by gospel great BeBe Winans, is the album's only nod to Chanté's gospel roots -- she's a minister's daughter who grew up singing in the church -- and is a passable nod to contemporary Christian music. The last tracks of the album, however, while good, are not necessarily anything to write home about (including the Quiet Storm mix of "Love's Taken Over," which, while soothing, robs it of the original's inviting bass groove).

Precious didn't exactly set the world on fire when it arrived. It peaked at No. 101 on the Billboard album charts and No. 20 on the R&B charts. But, from beginning to end, it showed the talent and versatility that Chanté possessed. She would go on to release several albums and singles throughout the '90s, including her biggest hit, "Chanté's Got A Man." She was also featured on the R&B soap opera known as The Isley Brothers' "Contagious." It's not a surprise that, unlike many flash in the pan R&B stars of the '90s who didn't fare as well, she's still alive and kicking within the industry. Whether it be major label or independent, a talent like Chanté Moore's will always shine.


TAGS:  audio, bebe winans, chante moore", Class of 1992, el debarge, keith washington, the isley brothers
Previous: All You Need Is Some Holiday ‘Love’ From CeeLo & The Muppets Next: Morning Soul: Something Just Ain’t The Same With The Way You Hold Me