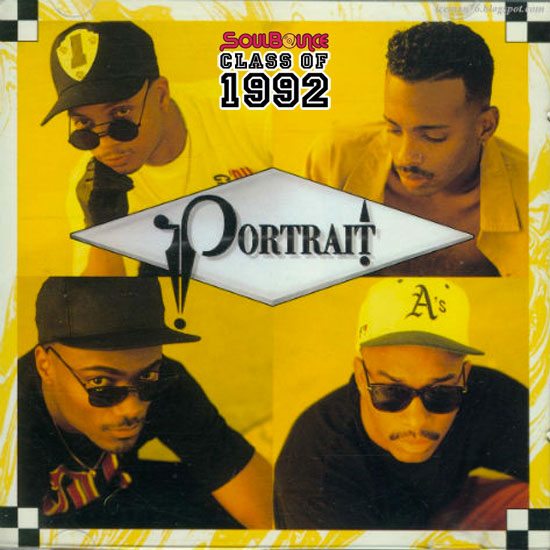 The decade of the 1990s gifted us with many things, some good and some not-so-good. There was the over-sized fashion craze where even the ladies wore their clothes baggy and everybody tucked their pants in their boots (definitely bad). However, one of the better aspects of the '90s was the rebirth of the male R&B group. Everywhere you turned, there seemed to be a new trio or quartet, rocking coordinated outfits and well-rehearsed dance moves while vying for your attention. While groups like Boyz II Men and Jodeci easily cruised to the front of the pack, there seemed to be tons of others such as Silk, U.N.V., Shai, H-Town and more that were hoping their melodies would catapult them to the top of the charts and into our collective memories for years to come. One of those groups jockeying for position was a quartet that hailed from the city of Angels by the name of Portrait. Consisting of members Michael Angelo Saulsberry, Irving Washington, Eric Kirkland and Philip Johnson, they seemed poised for the success that so many others at the time sought with the release of their self-titled debut album.

I remember first hearing about Portrait the same way that so many of us learned of new music back then -- on BET's Video Soul. Though it'd be nice to say it was the guys' blended harmonies in their debut music video, "Honey Dip," that first made me sit down and take notice, the truth of the matter is that as a 14-year-old, boy-crazy teenaged girl, the first thing that caught my attention was their looks. While my memory is hazy on which member of the group put cartoon hears in my eyes, it was their music that would ultimately make me a fan.

More than just a set of handsome faces, one of the things that set the group apart from the rest on their debut was that they were a self-contained entity. They weren't cobbled together by some industry bigwig that shaped and molded their sound and look. Much of the music on their album was written, arranged and produced by them, with Saulsberry even handling the majority of the remixes. He would go on to lend his talents behind the boards to the likes of Shanice, Diddy, Faith Evans and Vikter Duplaix more recently.

"Honey Dip" signified everything that was happening in R&B at the time. It straddled the line between soul and hip-hop, with lyrics smooth enough to make them appeal to the ladies and a beat that was tough enough to appeal to the men. The song would peak at #18 on Billboard's Hot R&B/Hip-Hop Singles & Tracks chart. The group would continue with their quest for stardom with the album's follow-up single, "Here We Go Again!" The ripple in the musical waters seemed to reach farther with the second single, charting simultaneously on multiple Billboard charts, including the Dance Music/Club Play Singles, Top 40 Mainstream and the Hot 100 charts. The New Jack Swing-influenced song would climb highest on the Rhythmic Top 40 and Hot R&B/Hip-Hop Singles & Tracks charts, reaching the #1 and #3 spots respectively. Everywhere you turned, it seemed people couldn't get enough.

Though the group appeared ready to embark on a long musical career with the success of their first album, it's unlikely they could have predicted that they had already reached their peak. The album's next single, "Day By Day," would only reach #42 on the charts. When their sophomore album, All That Matters dropped two years later, the group debuted a smoother, more adult sound that didn't appear to strike a chord with listeners. While it still contained such danceable, uptempo songs as "I Can Call You" and great ballads like their cover of the Bee Gees' "How Deep Is Your Love," they never gained the same momentum as they did the first time around. By the turn of the century, Portrait had more or less faded into obscurity, save for a few independent releases and a greatest hits offering.

As with much of the music from that era, time isn't always kind when revisiting Portrait with fresh ears. Two decades later, many of the songs are clearly a product of their time, with production that now sounds dated and sappy lyrics. However, at a time when so many of today's R&B artists prefer to skip the romance and make a bee-line to the bedroom, songs like "Yours Forever" and "Day By Day" carry a nostalgic feel that all these years later still make me long for some tall and handsome man to swoop in and sweep me off my feet. Even with their decidedly 90's sound, classics like "Honey Dip" and "Here We Go Again!" never get old. Though we (thankfully) no longer wear the fashions from back then, Portrait and all if its imperfections provide a nice walk down memory lane.