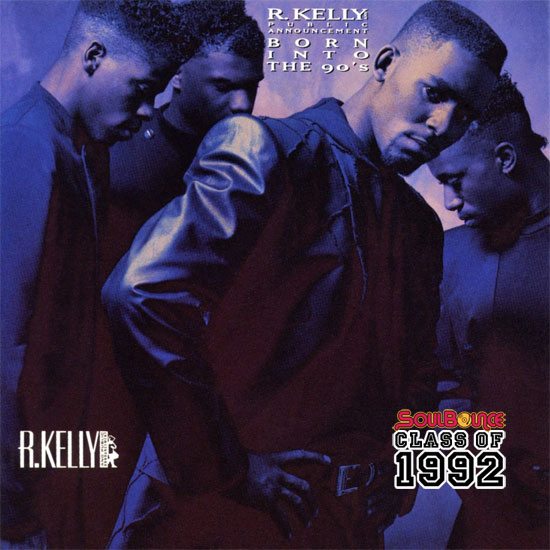 I saw R. Kelly in concert before I actually paid attention to his songs. At the time I wasn't interested in most male R&B singers unless their name was Michael Jackson, so adding another one to my list wasn't at the top of my list. However, on my 10th birthday, he and his group Public Announcement happened to be doing a tour with two of my favorite acts at the time: En Vogue and Arrested Development. During their turn on stage, while performing the now-classic "Honey Love," members of Public Announcement held up signs that read something like "You Must Be 18 and Over" or "18 and Over Only" while R. Kelly sang about doing grown-up things that my dad refused to comment on (yes, 20 years later, the irony of that whole moment hasn't been lost on me). Of course, as with any kid, the idea of something taboo piqued my interest and R. Kelly remained on my radar for some time after.

"Honey Love" was one of the stronger cuts from the album the crew had released in January of the same year, their debut Born Into the 90's. Listening to it now, you realize how true to the title the album is. The album is full of New Jack Swing grooves, posse cuts, impromptu raps, and syrupy sweet slow jams that almost every album from 1989-1992 had. In fact, Teddy Riley's influence on this album is so strong, you expect to find his name among the production credits (it isn't). While first single "She's Got That Vibe" was indeed a hit, it sounded so much like things that Bobby Brown or even Guy had done that it almost could've been done by anyone at the time (and let's not start on the slightly creepy Aaliyah call-out and the comparisons that can be made between Aaron Hall and Mr. Kelly). "She's Got That Vibe" was pretty much the vibe for most of the album. Elsewhere you could find tracks like the title track, which paired Patrice Rushen's "You Remind Me" with a hard-hitting beat and R. Kelly's raps (which, like now, aren't that impressive), and the now-dated "Definition of a Hotti," which I'm sure sounded great at the time, but just sounds very corny now.

To be honest, though, nobody really gravitated to the almost homogenous uptempo cuts. No, the uptempo songs of Born, while good, weren't where it was at. It was the slow jams that really stood out. "Slow Dance (Hey Mr. DJ)," "Dedicated," and "Honey Love" were all sandwiched back-to-back near the album's end and were the real gold of the album. R. Kelly's strength has always been writing a damn good slow jam (as evidenced by his solo debut 12 Play) and this is where he really got to shine. And the sequencing of them on the album was just like foreplay. You had the sweet, slightly innocent vibe of "Slow Dance" at first, the wind-up that set the mood for love and what could come later. The tender and loving "Dedicated" was the pitch, designed to woo and subtly seduce. Of course, "Honey Love" was the home run, and by the time it began, those drawers were pretty much signed, sealed and delivered (and the "Honey Love" video was also notable because it featured a relatively unknown Halle Berry getting down and dirty with Robert and the boys).

For R. Kelly, Born Into the 90's was a stepping stone to a very successful (and controversial) solo career. He shed Public Announcement soon after their tour was over and dropped 12 Play in the fall of 1993, cementing his status as a creator of bedroom soundtracks the world over. Although Public Announcement haven't fared as well as Mr. Kelly, they haven't done too bad for themselves. Since Born they've released three other albums and have undergone several member replacements and more than a few drops from labels. Along the way, they were able to drop a few hits, like "Body Bumpin' (Yippie-Yi-Yo)" (their biggest hit sans Kelly from 1998's All Work, No Play), "Mamacita" and "John Doe."

Born Into the 90's, while perhaps not what most will remember R. Kelly or Public Announcement for, is still the album that introduced to Robert's musical prowess and showed us exactly what he could do. Its ideas and themes were further expanded in R.'s greatest works of the '90s (and even, to an extent, Public Announcement's). It's also one of the last true New Jack Swing albums, for better or for worse, and has some great examples of what that sound was all about. Is there a reason that it's not rated among R. Kelly's greatest? Sure. But the handful of jams it did contain are reason enough that this album will always be remembered.