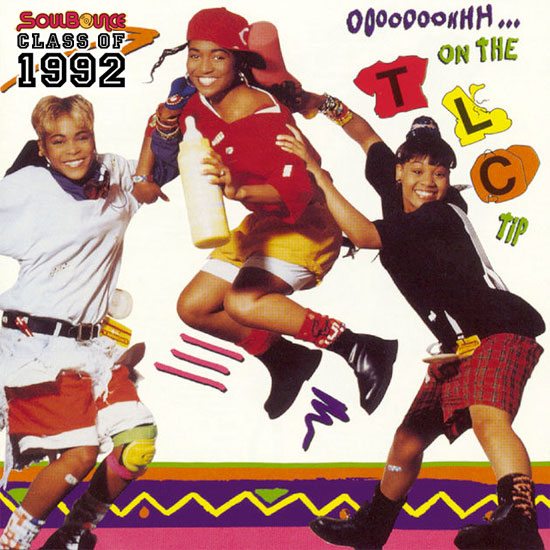 As an impressionable child of the '90s, TLC were sort of my Chopin "Awakening" moment -- well, minus the extra-marital affair and the "walking-in-the-ocean" deal -- but something about these three women sparked femininity and the fight for individualism within me that has yet to leave. While aware of the panther purr ways of Madonna and a certain Miss Jackson, nobody, at the time, had looked like TLC to me. They were wearing overalls, biker boots, baggy shorts, and baseball caps with bills strategically turned to the back. They were the kind of girls who looked as if they got deodorant marks on their clothes. They ate pizza and didn't count slices or calories. They weren't afraid to speak their minds and were unapologetic about it. Nonconforming yet oddly classy they were, and I loved it. Lucky for me, the '90s produced a slew of girl groups and vocalists that followed in this vein. Yet, before the Spice Girls would harvest their seeds in my growing garden of feminist/womanist ideals, the tomboy-ish party crashers known as TLC were the initial planters for that "girl power" movement, and, in personal scope, were probably the big sisters I never had.

TLC's beginnings occurred when singer-later-turned-minister Perri "Pebbles" Reid kickstarted her own management and production company, Pebbitone, and was in search of a female group to sign. Thus the trio of Tionne "T-Boz" Watkins, Lisa "Left Eye" Lopes, and Rozanda "Chilli" Thomas, three girls hailing from Atlanta, Georgia, were assembled and promptly signed to Babyface and L.A. Reid's blossoming LaFace Records label. Though a bitter brew would be made between the group and the former Mrs. L.A. Reid, which later led to Pebbles departure from secular music and TLC's bankruptcy issues, the era of T-Boz, Left Eye, and Chili began innocently enough and ushered in a new attitude for the women of the '90s.

Pegged as the female version of Bell Biv Devoe, TLC were a rowdy, slightly cartoonish, and mouthy trio, especially in contrast to their contemporaries like the classy dames of En Vogue and the homegirl sly sweetness of SWV. Yet, in all their rambunctiousness, Ooooooohhh... On The TLC Tip is solid debut fare to introduce the trio. While they would buff down a few splinters when their 1995 opus, CrazySexyCool came on the scene, On The TLC Tip is what you want a debut album to be. It's a shock of ice water splashed on you, slightly uneven, and it's something that progressively shakes up the formula and gives the sense of a new direction for R&B as it came out of the synthesized '80s. With this focus, TLC latched onto something tangible with the hip-hop genre and bridged the gaps to fluidly enter it into the pop music lexicon where that sound remains today. The set-up was simple: Left Eye was the exuberant and snarky MC of the group who had her say so in between T-Boz's raspy vocals and Chilli's soulful refrains. The simple concept is a bit of wizardry on the producers of On The TLC Tip (Dallas Austin, Jermaine Dupri, Marley Marl, 'Face and Reid) as well as the ladies themselves, because it proved to be marketable, making three top 10 singles and a hit debut all in one go.

Now, in no way can you have a conversation about TLC without throwing around the terms of "feminist" or "womanist" because they embodied that attitude to the hilt. The material heard here is sort of a response to hip-hop's brewing He-Man Woman Haters Club attitude, and tackle it to the ground they do. They are tired of that monkey of a man on their back (the sizzling guitar-rock of "Shock Dat Monkey"), they are in-tuned to demanding the best ("Das Da Way We Like 'Em"), and they will dress and act as they please ("Hat 2 Da Back") and anyone who objects can just take a hike. All these pro-women proclamations and more are smeared throughout On The TLC Tip with delicious hooks to boot.

The best moments are no doubt the singles. "Ain't 2 Proud 2 Beg" is rowdy in all the right places and undeniably catchy in others. With thick basslines, the sisterhood anthem "What About Your Friends" is clearly one of the finest moments in R&B and a definite game changer in terms of production. The sugary "Baby-Baby-Baby" has some paint-by-numbers lyrics, but it's a sunny good Babyface production. Non-singles beef things up, such as "Shock Dat Monkey" and the rugged "Bad By Myself," but they show range with the mid-tempo torch piece, "Somethin' Ya Wanna Know" and the social awareness of the wonderful "His Story" with its stylish rhythmic backing.

So the era of TLC and their success begins at this juncture and for the most part we know how it turned out as well as see the effects of their existence, not just in the music scene, but beyond that. While it was a merry ride, there are times I wish for TLC to still be kicking around dishing about "scrubs", love, and fun, and it still hangs heavy on my heart that Left Eye isn't with us anymore. Yet, the memories attached to this set and later efforts never will leave me, and I thank T-Boz, Left Eye, and Chilli for being as down to earth and as candid as they were during my coming of age as they provoked me to strive for better and to never be afraid to be me.