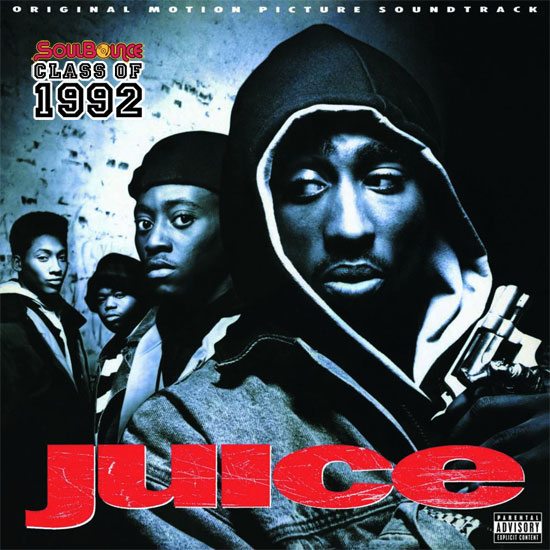 When Ernest Dickerson's film Juice and its soundtrack hit the streets, hip-hop heads were familiar with one 2Pac the emcee, but completely unprepared for Tupac Shakur, the actor. His performance as Bishop stood out way beyond the rapper-turned-actor deliveries of Will Smith and Ice Cube, causing us to look a little deeper into his past of acting in Harlem's 127th Street Repertory Ensemble and attending a Performing Arts School in Baltimore becoming an Oaklander and Digital Underground dancer. He was so convincing and commanding on the screen, we started to think maybe his rapping was a side hustle. And with no 2Pac offering on the soundtrack, his acting debut was made even more valid as the film was no ploy to sell his records. Let's also keep in mind that 2Pac was far from a rap "star" at this point and the soundtrack wasn't necessarily missing a song from him.

The soundtrack gave both the new jacks a chance to shine and some veterans one last shot. It also merged East & West Coast rap saying wannabe gangsters are a nuisance everywhere.

Leading with the newly platinum Naughty By Nature, "Uptown Anthem" set the tone of a hardcore score for a hardcore crime film. "We gonna break. We gonna bash. We gonna roll. We gonna smash!" had every club and house party nearly slam dancing and it remains one of Naughty's greatest hits. Treach's rhymes slightly nodding to Pac's "Bishop" was just enough for the film, but not overly so as to keep the song alive as a stand-alone. It didn't hurt that Treach and Pac's camaraderie (as seen in the video) predated their own careers as rappers.

The title tune was handled by the "God" himself, Rakim. While his skills and rank in the game were pretty much set by '92, Rakim hadn't had a hit in a while and had it not been for "Know the Ledge" and "What's On Your Mind" from House Party II, it's possible he and Eric B. would've been forgotten by this point. He took full advantage of the spotlight tune, delivering Bishop's account in first-person as only the God could. The same ledge-hanging could've been said for fellow Brooklynite Big Daddy Kane who had seen his success last a bit longer, but was quickly eroding amongst the "ladies man" rhymes he was overpopulating the airwaves with. The spit-fire "Nuff Respect" was even more necessary for getting Kane's next album released.

Even Salt-n-Pepa tried their hand at hardcore, albeit in vain, with "He's Gamin' on Ya." (Thank God for their getting back on track with '93's Very Necessary.)

Cypress Hill offered the young West Coast dose to the soundtrack with "Shoot 'Em Up," even though the film's climax featured their classic "How I Could Just Kill a Man." Gangster rap pioneer Too Short gave Juice its ultimate rites of passage with a West Coast legend co-signing the "keeping it real going wrong" sentiment with "So You Wanna Be a Gangster."

As black soundtracks go by this point, you had to have an R&B tune or two, even with a gangster film. While a few, who shall remain nameless, failed here, Teddy Riley's revisit of Heavy D's "Is it Good to You" featuring original vocalist Tammy Lucas succeeded. However, The Bomb Squad's production of Aaron Hall's solo debut "Don't Be Afraid" ended up as the soundtrack's biggest hit. Revisiting Public Enemy's recent hit, "Can't Truss It," a bit more pleasantries are added in with Hall's renowned first tenor for what would ultimately be his first (and only) #1 single -- albeit one with questionable, kinda rapey lyrics.

Finishing the soundtrack was a peculiarly placed vocal revisit of The Brand New Heavies' "People Get Ready," which was a tune found only in instrumental form on their debut album.

For me, the Juice soundtrack and film were the first to motivate me to critical journalism in college and will always hold a special place because of that. Historically, it was the arrival of Tupac Shakur as a force in black entertainment. He would soon follow this with his first platinum album, Strictly for My N.I.G.G.A.Z., a few more stellar performances as an actor, and several other random and revolutionary acts. Omar Epps' debut in the film was also one of note and while the movie isn't often regarded as one of the finest cinematic offerings, it and its soundtrack remain, in their own way, pivotal.