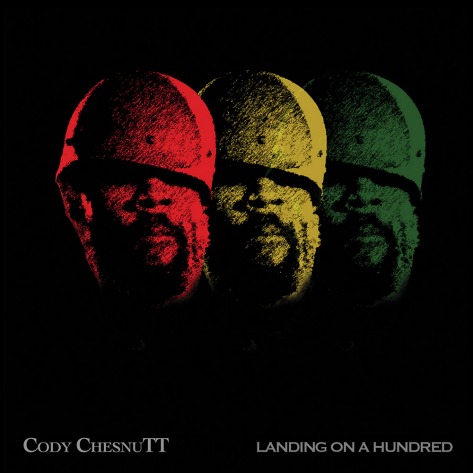 If I had to recommend a short list of albums that should not and must not be overlooked this year, sitting high atop that list would be Cody ChesnuTT's Landing on a Hundred. When it comes to albums, I have a type, and Cody's first full-length effort in a decade fits my type to a T. From lyrics to the voice to the instrumentation utilized, this is music that'll feed your soul and nourish your ears for years to come. If it sounds like I'm blown away and totally smitten with Cody ChesnuTT and his new album, it's because I am. They just don't make music like this anymore, or so I thought.
Center

On the page for what was once a Kickstarter project, ChesnuTT explained that "landing on a hundred" meant "landing on something truthful. Landing on something purposeful...something meaningful." He recorded portions of the album at Al Green's old studio, Royal Studios in Memphis, Tennessee. Judging from the content of the album, some of Green's music mojo must flow through the studio equipment because this music is not of our time. I tried to identify a couple of favorite songs from the album to share with you, but by the time I finished my list, it read like the full track list. There's not a bum song in the bunch.

Landing on a Hundred kicks off with "Til I Met Thee," which provides context for the entire album. It's clear Cody has experienced some rough times in his life and that rather than being driven by negative influences in his life, he's now fueled by his faith in God. "I've Been Life" gives me the same with its setting among a dizzying roll call of African nations. About four songs in, "What Kind of Cool (Will We Think of Next)" will have you lost in thought, second guessing your priorities. We here at SBHQ have jokingly sung about smoking "crack back in the day" as you might, too, once you hear the infectious song, but as Cody shares on "Everybody's Brother," that life was real for him, and it was no laughing matter. The song is an honest reflection of where he's been and where he is now that he has clawed his way out of one of the darkest places a person might see in their life. "Don't Follow Me" shines just as brilliantly as the others. On it he sings, "You can follow the wind, follow your skin, follow a tree that follows the sea, follow the stars, follow who you are, but whatever you do, don't follow me...'Cause I might steer you wrong." We can sit here all day and break down the lyrics to each of his songs, but even then, I'm afraid we still wouldn't do them justice. Even now, it's difficult to resist the urge to recite paragraphs of lyrics from each track -- they're all worthy, but you really have to listen to the album yourself to appreciate and absorb the messages. Yes, this is message music, and I'm totally over the moon about it.

Although he recorded in Al Green's old studio, songs about a romantic love are all but missing from the album. But, that's not to say lovers have totally been left out in the cold. For more than a couple of reasons, "Love Is More Than A Wedding Day" struck a chord with me, and may give pause to anyone planning their nuptials. Where many albums begin to wane around the midpoint, this one stays strong throughout. If you twisted my arm and forced me to choose a favorite from the second half, "Chips Down (In No Landfill)" would probably be it.

Go ahead, get your good speakers out and play this album straight through at least one time. You'll need your good speakers because if you're only going to give it one listen, you need to be able to hear, better yet, feel the complex instrumentation that supplements each moody song. Once you do, I know you'll be back for more. This introspective, carefully crafted album is full of music of the type that some of soul music's greatest artists made in their time. Without directly imitating any of them, Cody ChesnuTT managed to color the album with shades of Donny Hathaway, Marvin Gaye and Sam Cooke. He landed on a hundred by giving much more than that. Despite our efforts to convince you that this album need not go unheard, the reality is that so many people will never know the masterful piece of work that it truly is, and that is a crying shame.