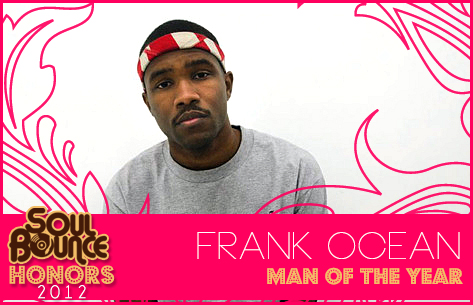 Was there any other man that this honor could've gone to this year? Ending 2011 with numerous accolades, including sharing last year's SoulBounce Man of the Year title along with everyone's favorite rapper Phonte, Frank Ocean started 2012 with nowhere to go but up. Still riding high from "No Church in the Wild," his collaboration with Jay-Z and Kanye West's dynamic duo The Throne, the beginning of 2012 didn't see much from Frank outside of the occasional leaked track or his appearance on spare projects with his Odd Future cohorts. But then the months started to turn warmer and by summer we had a cryptic viral video playing a then-unheard track that would be the first taste of his incredible debut channel ORANGE. That track, which we would eventually discover was the near-ten minute epic "Pyramids," was just the beginning. Soon after, you couldn't have a conversation about modern music, especially R&B, without bringing up Christopher Francis Ocean.
Center

Surprisingly enough, though, it wasn't music which got the majority of the world anticipating Frank's debut. It was Frank's deeply personal open letter commenting on his sexuality that got everyone talking. While Frank didn't deign to conveniently label himself gay, bisexual or otherwise, the earnest and heartfelt note touched on the unrequited love he felt for another man. While the most optimistic of us applauded Frank's bravery and honesty and the most cynical felt it was a shameless marketing ploy, it was a move that got the masses to tune in to channel ORANGE, helping the album to sell 131,000 copies in its first week -- a majority of which were iTunes sales after the crooner and his label, Def Jam, smartly decided to release the set one week early digitally.

And those smart enough to tune were in for a ride. With songs like "Sweet Life," "Pilot Jones," "Super Rich Kids," "Sierra Leone" and the album's emotional core "Bad Religion," channel ORANGE was a unique look at the world through the singer-songwriter's sometimes clouded lens. Touching on issues like romance, sexuality, drugs and generational apathy and excess, ORANGE crafted an engaging tapestry that couldn't be easily dismantled into serviceable singles. Instead, it was meant to engage as a whole, taking in the experience from start to finish and finding new things with each listen.

But, as if launching his debut wasn't enough to have on his plate, Frank also found the time to contribute to other projects as well. Working again with Brandy, Frank's haunting "Scared of Beautiful" was one of the standout tracks of her slightly uneven Two Eleven. And, when it came time for Alicia Keys to ignite her Girl on Fire project, she enlisted Frank's help for the heartfelt "One Thing." Even director Quentin Tarantino came calling on Frank to write a song for his slavery revenge tale Django Unchained. And though the song Frank wrote, "Wiseman," eventually didn't make the film (for some odd reason), it was still an inspired work that, like all of his songs, highlighted the human experience in his own unique way.

It seems that, after being a very busy man for quite a few years now, Frank is finally going to take some much needed time for himself in 2013. While I can't say what direction he'll go in after, I know for a fact that whenever he decides to come back, we'll all be eagerly anticipating what comes next.