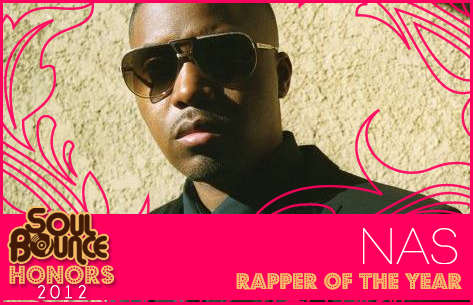 I'm the first to admit that I have a love/hate relationship with hip hop. At its worst it glorifies violence, ignorance and superficial lifestyles. But the bright shining light on hip hop is when it's in capable hands and crafted with care -- in other words, when it's at its very best. In this state it becomes the perfect union of music and poetry, of intelligence and street cool. It is the voice of the people. Which explains why there are a few names that throughout the decades, despite personal hardships, professional ups and downs, evolving trends and regardless of which "it" artist is on everyone's lips, remain hand in hand with the genre. One such name is that of Nasir Jones.
Center

This was the year that Nas returned with fire and reacquainted hip-hop lovers with the artform, reminding us what being an emcee is all about -- being a great storyteller. Nas' 2012 release Life Is Good emphasized that for a rapper, an album should be treated like a book to an author, after all this is something that you've poured your heart and soul into writing and creating. It tells the story of a chapter of your life so that others can come along and take what they need from your book to go on in their lives, be that inspiration, an understanding word, motivation and, of course, a hell of a lot of head nodding. For Nas, the story was that of his life as a grown man, including his much-publicized divorce from Kelis on "Bye Baby" and tackling life as a father on the poignant "Daughters," to his views on society on the "World's An Addiction." But before all this he started us off with the classic hip-hop styles of "Nasty" and "The Don," just to remind us just how equally outstanding his lyrical content and flow is.

He affirmed to us that keeping your head as high as the road you take are the way to be, while remaining true to self. Despite rumors of his use of ghostwriters emerging soon after the release of Life Is Good, Nas received support from those who were singled out as ghostwriting for him, such as Jay Electronica, and took it all in his stride. Who really believed those rumors anyway? Not I. Nas' gift is in his ability to lyrically paint a picture. That can't be taken away from him.
In 2012, he showed there was peace with he and ex-wife Kelis, most notably by utilizing her wedding dress for his album cover, he became involved in the Saving Our Daughters Charity and he appeared with his father, jazz musician Olu Dara, in a holiday campaign for The Gap. This is one rapper who wears his heart on his sleeve and isn't afraid to convey his emotions eloquently and let us know what matters to him, while keeping it real and maintaining masculinity. To top it off he achieved a rarity and successfully put all that in the shape of a quality hip-hop album, which made our best albums of the year list.

While the name Kendrick Lamar may have been stealing all the light in the hip-hop world this year, and with good reason, respect needs to be given where it is due. There's still something very special about Nas and what he gave to us in 2012: a reminder that life is good.